For our final Gutsy Cooks Club October rice recipe the theme of paella vs. risotto was the challenge of the week.

Paella is big fav in this house. We love paella. We first had Mexican Paella on our honeymoon in Puerta Vallarta poolside. Since then we've made a few versions of paella with both our supper club and our more informal wine group gatherings. Most recently in March with our wine group, see A Paella Fiesta inspired by Rick Bayless.
So tonight this week we went the risotto route. G loves risotto actually. And one of the listed recipes was actually a cauliflower risotto, which sounded phenomenal. But then we had pizza recently with our dear friends 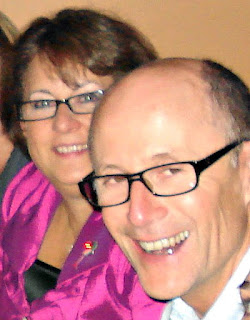 The Proctor Farmers market is open year round now.Which is great we took a rainy day walk last weekend to take it the market. 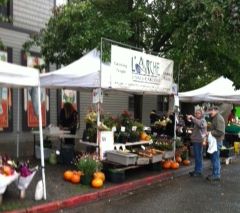 Lots of vendors had all varieties of squash available on this visit. 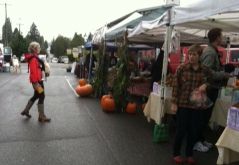 We happened to have some left over butternut squash from this trip, which is what the recipe actually recommended using when making pumpkin risotto. So there you have it...a cooking mission was almost underway before we knew it.
We went to Food Network and found this recipe by Wolfgang Puck for Pumpkin Risotto, which actually called for butternut squash as opposed to pumpkin as well.

We first baked half of the butternut squash in the oven..

before pureeing it in the food processor.

We diced the other half of the butternut squash

The squash was removed and then garlic & onions went into the pan with some olive oil.

Next the rice was added and then some white wine.

Once the wine had absorbed the warm stock was added bit by bit, being absorbed before the next addition. (We used chicken stock as we love that flavor most.)

Once all of the stock was absorbed the squash puree was added. It definitely had that baby food appearance.

We opened a bottle of Walla Walla Merlot made by Charles Smith called the Velvet Devil. You have to admit it went with the whole Halloween, pumpkin kind of theme. Not sure G intended that idea when he bought it. Pretty sure not.

Finally some Parmesan and butter were added to the risotto before plating with a bit of sage for garnish.

The risotto was fantastic. Al dente, creamy and flavorful with just a hint of sweet from the squash. I under seasoned with salt a bit but we were able to fix that by adding a bit more while eating.

But overall we loved this risotto.G mentioned he thinks he would of liked it even better with some wild mushrooms. And there were plenty of recipes for that version as well on the food network site.
The only down side is we now have enough left to eat for the next week or two and that probably won't happen.

The rice ingredient challenge for Gutsy Cooks Club was great this month. We enjoyed cooking some new and favorite recipes with rice this month.
﻿
Posted by Unknown at 8:48 AM