Our wine group pals were inspired to have a paella party last summer after our friends Jim & Lynne returned from their vacation in Spain.﻿

But Summer craziness got in the way then school started, (we're all educators in one form or another) then ski season opened, etc.. and it ended up that it was March before the paella party actually occurred. This group of friends is good with rolling with it.
G&I offered to host; we've done paella parties before, have the pan and love to entertain so it was a no brainer to make that offer with this group.
Now Spain inspired the gathering.. but Rick Bayless' cookbook Fiesta At Rick's inspired much of our menu for the evening. We know Rick's is obviously the Mexican version of paella but we're not a finicky group...well not finicky unless we're talking wine, I should make an accurate statement if I'm speaking for the group. 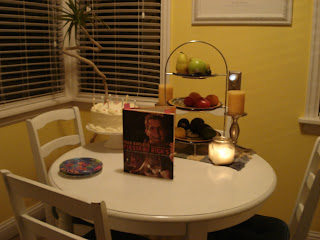 We asked each couple to bring a half pound of seafood (mussels, clams, shrimp, prawns & cod) a tapas dish and a bottle of wine.
First we started off with Rick's Champagne Cocktails and tapas.(drink recipe linked and available on Rick's website http://www.rickbayless.com/  we used lime, lemon & blood oranges for our margarita combination....they were so yummy!) 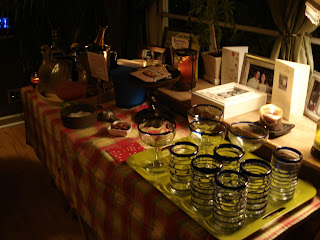 We had a variety of wonderful tapas to start off with. We actually could have been fully satisfied without even having paella but it was the theme of the party so we couldn't really abandon the idea at this point.
Let's see what tapas I can even remember at this point: (sadly I didn't get individual photos of each dish....maybe too much tequila already at this point ) 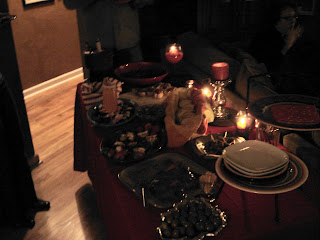 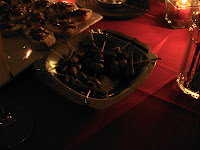 After indulging in many tapas & champagne margaritas G&I got started with the paella. We used Rick's Mexican Paella for Six recipe from Fiesta At Rick's but doubled it for 12. We also added clams and cod to the seafood mix and substituted chicken thighs for the drummettes. 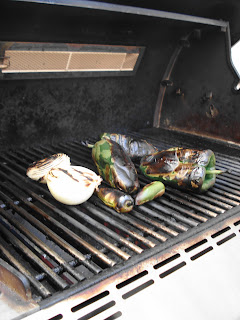 Earlier in the day I had roasted the poblano on the grill. The poblanoes are added to the sofrito mixture which I started inside on the stove. I added the chorizo. 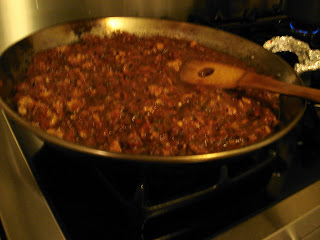 Next it was time to add the bomba rice and warmed chicken broth to make it into a paella... 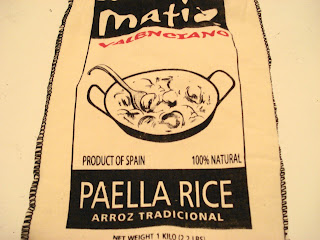 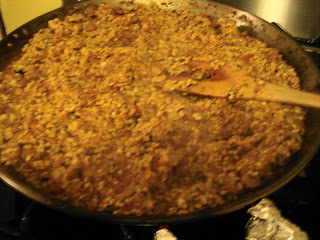 After cooking about 15 minutes we added the chicken thighs, clams, mussels, prawns and cod to the pan. 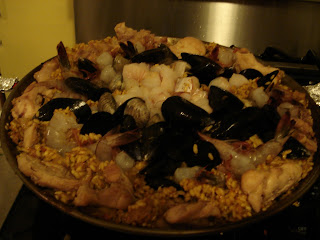 Next we covered with the pan with foil and moved it out to the wood fired grill. Our original Summer Paella Party plan was to do it all outside on the patio but obviously in March that wasn't going to happen but luckily on this Saturday night it was clear and not too cold so we were at least able to finish the paella on the grill.
﻿﻿﻿﻿﻿﻿
﻿﻿﻿﻿﻿﻿

We transitioned from the tequila and tapas to the dining room table while G did the finishing touches with paella. 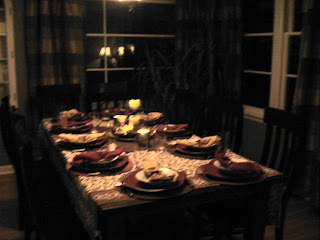 We opened our varieties of wine..some Spanish, some Washington but mostly reds with exception of Tom's Rose'. 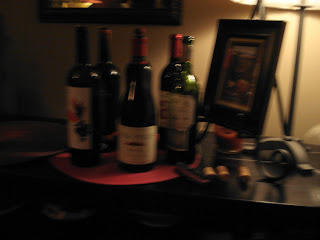 Since this is definitely a special group of friends well worthy of opening one of our splurge wines we were happy to do so. About six years ago a wine distributor friend turned us on to Spanish wine from the Jumilla region of Spain called CLIO. Since 2004 we've collected each vintage. It's not an easy wine to always find so we're not easily drawn to sharing it  usually but we love this group of folks and it's always fun to share wine with people who also appreciate it in the same we do. For this occasion we opened the 2005 vintage and it was superb. It can be a big, jammy wine so I had opened it earlier in the day to allow it to breathe and be at it's best in time for dinner. 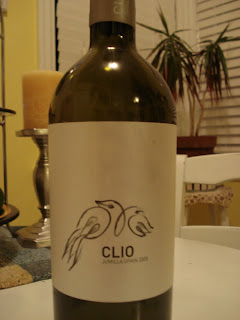 Finally around 9:00ish that evening we were ready to serve the beautiful & collaboratively made paella. 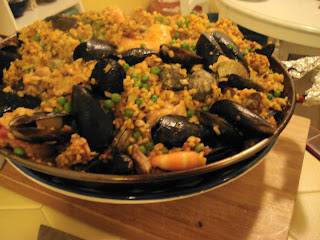 We were all very pleased when it finally made it to the table. 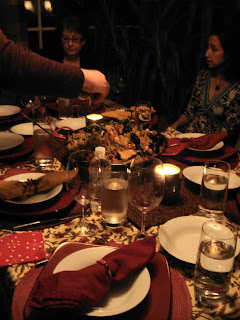 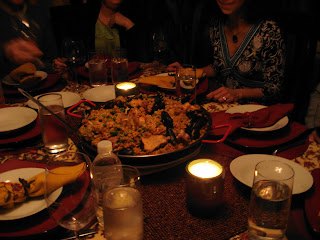 It was a great meal filled with stories, laughter, catching up with great people who are dear friends.
The day before happened to be G's 41st birthday so we took the opportunity to celebrate him with a heavenly red velvet cake that I picked up at our favorite bakery Corinna's. 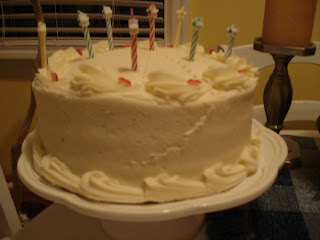 He had actually requested their vanilla cheesecake but I hadn't ordered ahead and they were out so this looked beautiful and he likes red velvet as well. (I love red velvet, but it was his birthday so I wasn't disappointed that he likes it.) 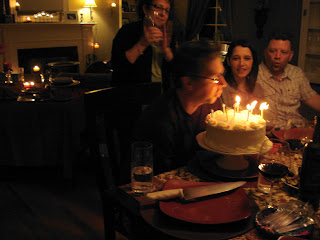 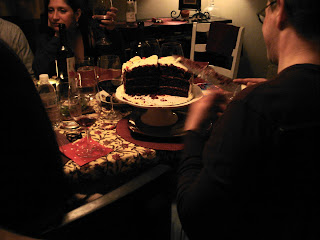 We so enjoyed hosting our "finally" Paella Party Night. Our friends Jules & Jim were missed. Some of us actually stayed drinking wine and enjoying each other's company around the table until almost 1:30 a.m. that night. Let me tell you G & I felt it the next morning. Maybe Tequila, Champagne & ungodly amounts of red wine shouldn't all be consumed in one night together once you're over the age of 30? But hey there was plenty of food in our bellies to soak it up let me tell ya.
We look forward to our next adventure with this food & wine loving group of friends who are somewhat a second family to us now!
Posted by Unknown at 9:07 PM