Well not sure about this one...this may be my first The Illustrated Kitchen Bible Recipe that is a non-recommendation for my Gutsy Cooks Club adventures.
This recipe for Irish Stew called to slice & chop onions, carrots, potatoes and lamb then basically layer it all in there uncooked with salt & pepper, thyme & bay leaf and then top off with beef or lamb broth and bake. So just the method itself left me questioning the technique.
Even I know to get a good layer of flavors in a stew the meat is best seared before going in the pot to become a stew. So that was the first adjustment to the recipe I made which was purposeful. The other adjustments were more in response to being too lazy to want to go out in the pouring down rain to the store again this weekend.
Once I realized G wouldn't actually be getting home until after 9p.m. tonight I decided to alter my serving plan. My sister, niece & nephew were coming for the afternoon so I decided we'd have the Irish Stew for dinner.
I had saved & froze the other half of the huge lamb roast that I bought for the lamb kabobs a few weeks ago so I pulled that out of the freezer and then chopped in small pieces and seared in olive oil first seasoning with salt & pepper. 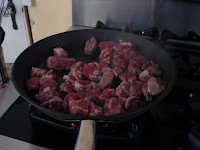 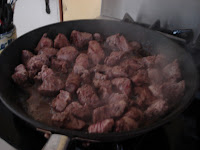 I then prepared my veggies. I had baby carrots and baby Yukon gold potatoes on hand so I went with those options. 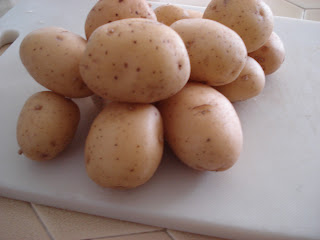 It called for 2 1/2 cups of beef or lamb broth and for the life of me I was sure I had organic beef broth in the pantry we always do but I was wrong evidently we don't always after all. I decided to improvise with a combination of half chicken broth and red wine in it's place.
I used a great everyday Washington Cabernet Sauvignon Grande Estates from Columbia Crest. I highly encourage you to follow the link and read more about Columbia Crest wines. They are incredibly easy to find, get great ratings for their price and are a very reliable everyday and cooking choice. 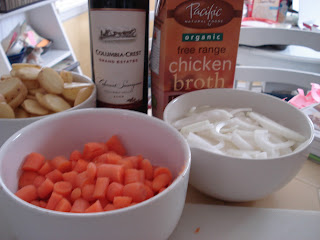 I layered the potatoes, lamb, onions and carrots seasoning with each layer. Added the bay leaf and thyme and topped with my chicken broth red wine combo.
I then put it in the oven for an hour covered.
While cooking I had fun with my niece & nephew making tie dye cupcakes. What a messy adventure...but they loved it.
I then removed the lid from the stew and let it cook another 40 minutes. Even then the liquid hadn't really absorbed much. 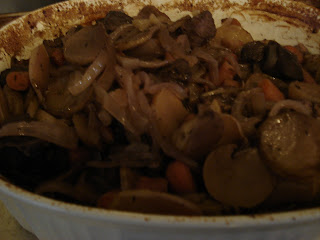 We had stew with the ficelle baguettes I had made yesterday that I warmed before serving.We topped it with a little grated Parmesan (my niece & nephew are much more likely to indulge if it's topped with a little cheese.)
The Irish Stew turned out okay, not great, not much flavor just rather blah to be honest. The lamb tasted good but the rest was nothing to rave about. 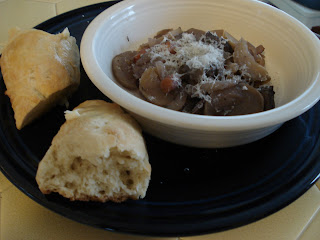 The funny story of the evening was that my niece & nephew happen to be the world's most picky eaters so just when I was ready to snap a photo to send to uncle G because he wouldn't believe it...I said "Oh uncle G will be so shocked you're both eating lamb stew" it was all over they had no idea it was lamb and were happily eating it until then. My mistake. They loved the bread though and of course their wacky tie dye cupcakes for dessert. Sadly I didn't get a photo of those wacky cupcakes.
Posted by Unknown at 7:27 PM