The week our menu for the Gutsy Cooks Club is inspired somewhat by St. Patrick's Day; Ficelles, Irish Stew and a French Apple Tart. (I'm going to skip the dessert part this week with only 13 days until Mexico we have to cut back a bit...obviously not too much.)
G's outta town at a conference in San Francisco so my goal is to build the meal over the weekend and then serve it to him when he gets home Sunday night. Although there's no doubt he's been eating some fabulous food in the Foodie Mecca of the west coast I know he'll still enjoy coming home to a good homemade meal.
My first round was to make the Ficelles which are small, light & crispy baguettes. Oh no bread again...can I really pull this off? I was willing to try.
I am always surprised how few ingredients bread really has it in it: Bread flour, Instant active yeast, salt & water. 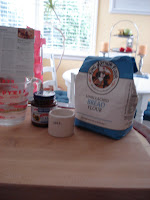 I first mixed the flour, yeast and salt in a bowl until it was a soft sticky dough. A confession first..the recipe list of ingredients calls for 4 tsp of salt. The directions for mixing the flour calls to add the first tsp of salt into the mixture, I missed that part that only called for 1 tsp in the flour mixture and added all 4 tsp (oops.) But I just figured the bread would have a bit more salty flavor.

With problems of getting my dough to rise for the english muffins last week Monica had kindly suggested heating the oven to the lowest setting and then turning it off and leaving the oven light on. So I heated up the oven to the lowest setting and then turned it off leaving the light on.
I then kneaded the dough on the butcher block for 8 minutes
and then divided the dough into 4 parts and rolled them out into four logs and placed them on two cookie sheets.﻿ 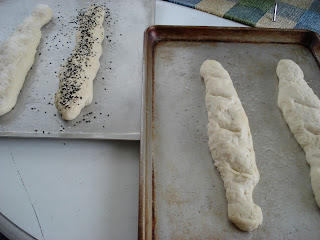 I then decided to try 3 different finishing touches. The first as described in the Illustrated Kitchen Bible dissolving 3 tsps of salt in boiling water (since I had put the other 3 tsp into the dough accidently I decided to just use 2 tsps of salt dissolved in the water for the finishing) and then brushed 2 of the loaves. The other two I first brushed water on and then topped one loaf with a mixture of black and white sesame seeds and the other with grated parmesean cheese. 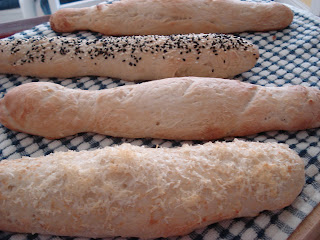 I then baked them using the convection choice on my oven for 15 minutes. They came out ligthly brown and crispy on the outside and my first taste with a little smear of butter was delicious.
I'm sure it will be great with the Irish Stew when I make it tomorrow. 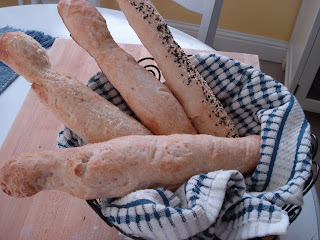