For Gutsy Cooks Club this week our assignment was to make 2 things that NEVER, EVER would I dream of making: homemade English Muffins & Eggs Benedict. First, who knew you could make your own English muffins. Obviously kidding, but really even though we eat them on a very regular basis I never imagined  making them since bread & baking were involved. But guess what.... there is no baking involved really! And second before tonight I personally had never eaten nor made eggs Benedict having hated any runny type of egg product before August of 2010. So maybe not for the other Gutsy Cooks but this week was actually definitely more on the gutsy side for me.
We actually made this as dinner which was definitely pushing it but commitments are commitments and our weekend was far too hectic for any fancy breakfast making last weekend so dinner was the only way this was going to happen.
G was getting ready to fly out to a conference in San Francisco so this was his going away meal so to say and his only involvement was in eating it not making it. 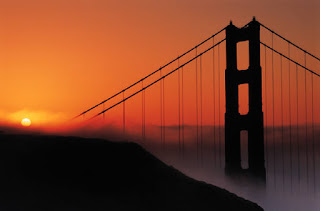 First I gathered the ingredients to make the English muffins which there weren't a ton of which made the process a little less intimidating. 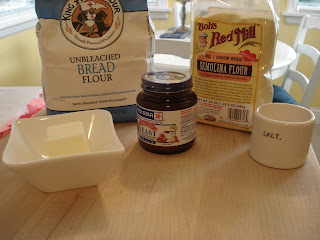 I mixed the dough in the bowl and once sticky kneaded in flour for exactly 8 minutes as that's what the Illustrated Kitchen Bible called for and being afraid of making a bread product I was going to follow the directions exactly as called for. It came out as I hoped it would. Then it needed to rest & rise for an hour. We went for a walk to get a little exercise. 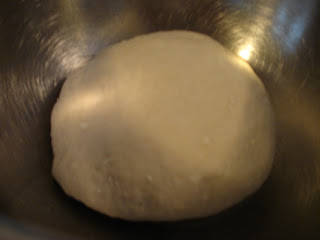 When we got back I was a bit worried because the dough hadn't doubled in size as it said that it would ( I think my rising spot might not of been warm enough) but I went forth anyway and kneaded it more and divided into 10 small disc and let rise on semolina for another 20 minutes. 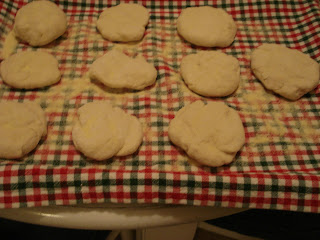 While waiting for the second rise we opened a bottle of  Savoureux Pinot Gris from Oregon and I went on YouTube to find a demo on poaching eggs because it'd been awhile since I first did it and I referred to the YouTube video the first time as well. 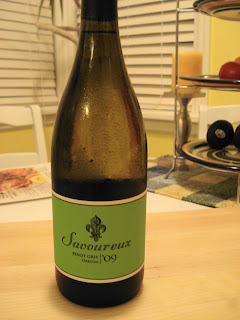 Finally the muffins were ready to go in the pan. 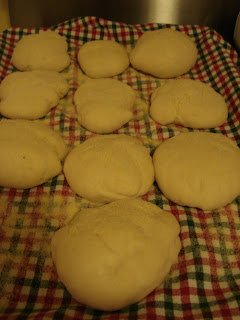 By this time it was almost 8:00 and we were hungry. I started the Hollandaise in the food processor...wow, 12 Tablespoons of butter...how could it be bad? It turned out great; light, creamy, maybe a bit too lemony but very good. 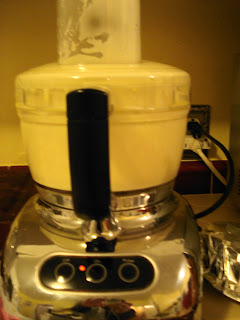 Since it was our dinner I decided to make a spinach salad with a little chopped red onion, sliced strawberries, almonds and a raspberry vinaigrette.
I poached the eggs, split & toasted the muffins added some Canadian bacon to top the muffins, placed the eggs and topped with the hollandaise, garnished with a bit of chopped basil and finally dinner was served. Thank goodness! 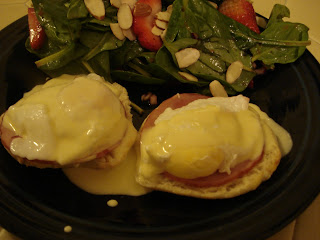 What a tasty breakfast for dinner dish this turned out to be actually. Can't believe I really never had this classic dish before. But so glad I have now. 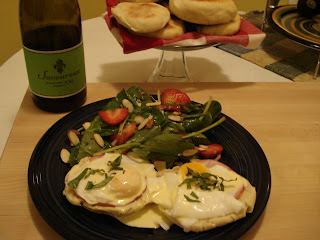 Pretty sure we'll be having it again soon!
Posted by Unknown at 7:31 PM