A recent trip to a local Mexican Market reminded G he had been wanting to make Rick Bayless' Classic Red Mole recipe from his Mexico One Plate at a Time cookbook. (Link to recipe for red mole found on Frontera website.)

According to Rick mole is Mexico's national dish/sauce that's made with pride for celebration. Taking this recipe on is an endeavor to say the least, an all day cooking affair. Mole is opulent and complex and shouldn't mucked up by preparing it with too many other things or flavors for it to compete with.  We decided to keep it simple and go with chicken thighs over polenta served with another recipe from Rick Bayless' Fiesta at Rick's for a Roasted beet salad with Red Onion Poblano and Lime. (Link to recipe found on Rick's Frontera website.)
He started with the mole first as it's obviously the most time consuming part of the meal he prepared.

G got started by seeding and stemming his dried chiles (mulato, ancho and pasilla)

He ground his spices and grated his chocolate.

He was finally ready to get it into the dutch oven. Basically the chiles and spices are fried and then some water is added and that's the base of the wonderfully rich and layered sauce.
Over the next 2-3 hours he was in the kitchen adding the next layer of raisins, garlic, tomatillos,etc, etc...on and on it went. When the sauce was finally thick enough to coat a spoon he put his chicken thighs in the oven.

Next he started on his Roasted Beet Salad 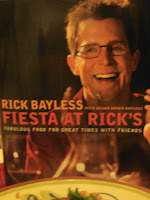 made with these beautiful red and golden beets.

He first cleaned and then roasted the vegetables.

After roasted they are seeded and cut into slices for the salad.

The smell was amazing before it was even all dressed and ready.

He finished the salad with some lime juice, cilantro and some cilantro.

Next I finally got involved in making the chantrell mushroom polenta for the chicken and mole to rest upon.

It was finally time to plate up. We opened a bottle of 2007 Rulo Cabernet Sauvignon picked up from one of our fav Walla Walla wineries purchased at the winery during our 10th anniversary trip for this special meal to be shared with my sister and Mike.

The entire meal was outstanding.G was very pleased was his all day work which is also a plus, nothing more upsetting to work all day on something to have it be a disappointment. The mole was perfect so many flavors but none overwhelming another just a perfect complexity of taste.

If you love Mexican flavor and/or mole and have some time you need to make the mole. The beet recipe on the other hand doesn't take much time and is a MUST make.
﻿
Posted by Unknown at 9:37 AM