One of the things that annoys me the most on weekends is waking up at 6 a.m. on Saturday morning and not being able to sleep in. Especially after being so tired every work day when the alarm goes off at 5:30 and looking forward to the weekend just to be able to sleep in.
It's just a bummer. 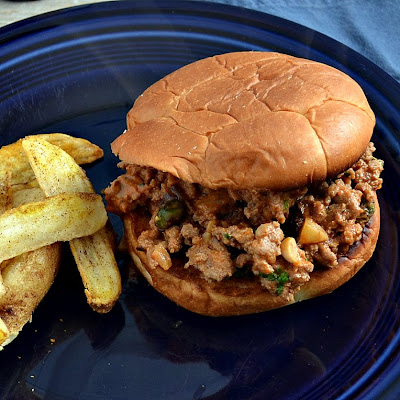 But this delicious lunch came about because of just such a recent bummer. After laying there listening to G snore from 6 a.m. to 7 a.m. I decided to turn on the TV and see if some "different" background noise might help me fall back to sleep. No such luck on the falling back to sleep front. But I came across Aarti Sequeira making Bombay Sloppy Joes (recipe linked) on her Food Network show Aarti's Party.
G loves Sloppy Joes. Me not usually so much. But I do love Indian food and even more I LOVE Indian spices. And this recipe just called to be made ASAP. I mean that day, for lunch.
I especially loved that it was made with ground turkey and had many of the same flavors as our favorite local Indian Restaurant, Gateway to India, dish Chicken Tikka Masala. 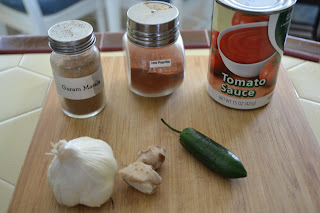 First came the sauce. Made with a typical Indian trinity of chopped ginger, garlic & chile. Aarti called for Serrano but we had some jalapeno that needed to be put to use so I used that instead. 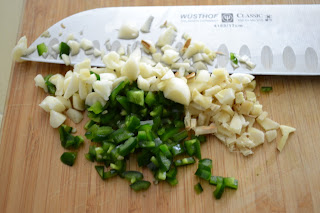 Next went in the Garam Masala and Paprika (We love spicy so I used Hot Paprika) to the sauce pan with some oil. I learned from Aarti this is called "blooming" the spice. And bloom it did. It put off an amazing aroma throughout the house immediately. 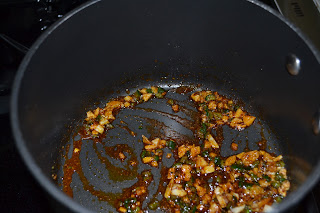 To the spices I added the trinity and let it soften before adding the tomato sauce and some water.
Next I started the meat mixture. I chopped some onion and more jalapeno. 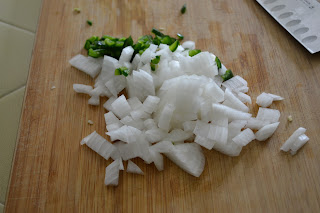 But first I sauteed some golden raisins and pistachios just long enough to let the raisins plump and the nuts brown. 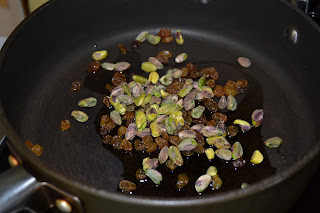 Already the smells going on in the kitchen were enough to get G off the couch in the middle of college football Saturday to come ask, "how long before we get to eat?"
The raisins & pistachios came out of the pan and in went the cumin, onion and jalapeno. 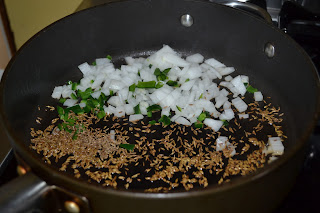 More wonderful aromas. Next I added the ground turkey. 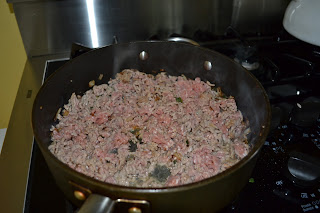 After the turkey was pretty much cooked through I added the sauce mixture to the meat mixture to create a wonderful marriage of Indian flavors. 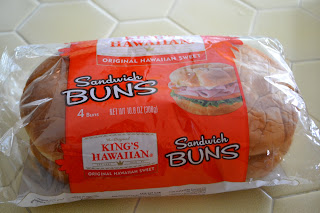 I happened to have some sweet Hawaiian style sandwich buns that I thought would be perfect accompaniment to the Indian sloppy joes. 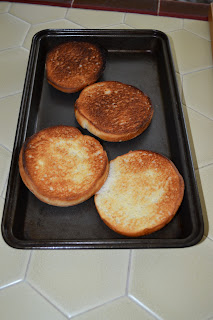 Since they are rather soft in texture I toasted them in the oven hoping that would help make them a little more stable to contain the meat. 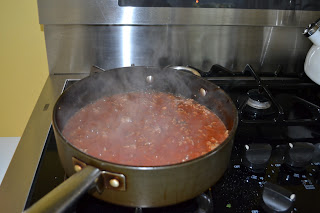 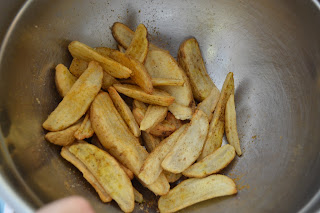 While the meat mixture was doing it's thing I tossed some frozen rustic fries with curry powder, garam masala and salt to go with the sandwich. 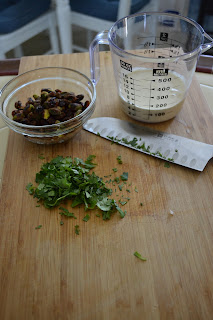 It was time for the finishing touches; heavy cream, the pistachios and raisins and some chopped cilantro. 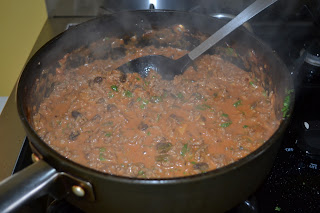 Yum. It really did smell just like chicken Tikka Masala. We knew lunch was going to be wonderful. 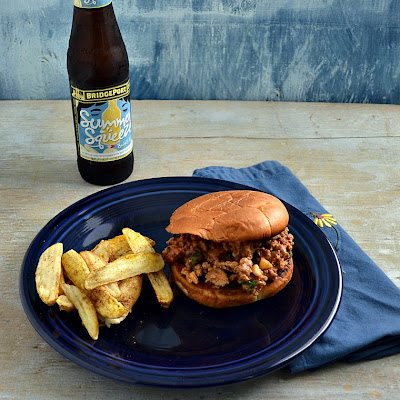 And we weren't disappointed it was AWESOME! So although I was hoping to get caught up on some sleep this weekend..instead I came across an amazing new "fav" recipe that we would of possibly not found if I had been sleeping in.
So in this instance an annoyance turned into a pleasure!
Posted by Unknown at 2:03 PM