We usually only get around to making our own Italian Beef Sandwiches maybe once a year or less, so G has either been truly inspired by his new meat slicer or the momentum of the Chicago Bears going to the play offs is making him crave Chicago’s finest eats more. 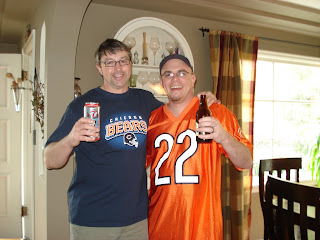 But when G found out the Bears would be playing the Packers in the playoffs he immediately spent many hours ruminating over whether he’d be having sandwiches FedEx’d from Portillo's or if he’d be making his own again. He opted to make his own.
Last time we made beef he was challenged by getting the “gravy” spices just right and finding the perfect bun to hold the very juicy beef and gravy. G spent some time researching different beef recipes online and found one he felt looked a bit more flavorful in the spice department, it included onion powder which T was confident to be the key missing ingredient last time. It's actually a blog about ribs but has a great post regarding Italian Beef (linked.) and includes the recipe we used this time.
G invited his football buddies over and started his preparations. This time he thought he’d found a better bun because it appeared to have the right texture of crust on the outside. 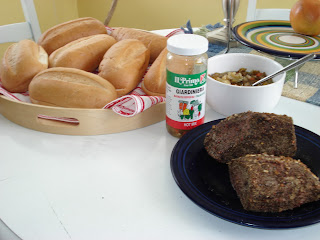 Unfortunately it was pretty clear the Bears weren’t going to dominate the game very early in. By half time T was able to get G to focus on his sandwich making and slice his carefully spiced roast. Sandwiches were served in the third quarter, the Bears finally scored and everyone was optimistic with very full stomachs.
G’s gravy was very good, well-seasoned and savory. He was concerned it was maybe a bit too spicy for some of our guests due to the extraordinary amount of black pepper he used on the roast but nobody confessed to thinking it was too spicy. We both love spicy so we don’t always trust our internal spice meters. 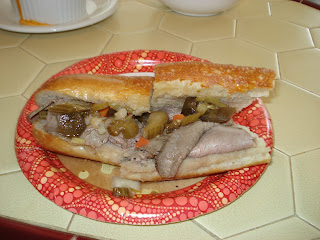 The only needed tweak continued to be that the buns were still just not right. The ones used on this day were far too large and bready after actually getting to taste them while holding the sandwich filling. We continue to be on the search for the perfect bun with a slight chew on the outside to hold the juices and not melt away. I suppose that’s our Italian Beef quest.
The Bears lost which was disappointing and also means G and his buddy won’t be ordering pizza shipped from Chicago’s Giordanos for the Super Bowl after all. But as I tried to reassure G there is always next year.
Posted by Unknown at 4:41 PM