It’s been one of those weeks that have become far too common for us. G has had professional development training each night until 6:00. I had a parent night until 8:00 one night and a get caught up night until 7:00 another and then two mornings of starting with 7 a.m. meetings. These are the weeks it often feels like we’re just roommates in a bunkhouse at times.
But Wednesday night G did make it home before me and he picked up a new Better Homes & Garden Mexican Cooking magazine and found a recipe for Poblanos Stuffed with Black Beans that he immediately knew he wanted to make. It was great to come home and know he was making us a nice meal, while I sat on the couch with my laptop, working sadly, but at least it was in front of a DVR’d episode of the Bachelor to get caught up on.
G actually loves to cook with peppers of almost any kind, but especially Poblanos.
Poblanos Stuffed with Black Beans
1 14.5 oz can diced tomatoes (G used fire roasted, yum)
1 c chopped onion
A fresh jalepeno cut up
3 cloves garlic
½ tsp salt
2 cans black beans
6 oz. Monterrey jack cheese
1 c water
¾ c corn meal
11/2 tsp cumin
½ tsp salt
¼ tsp ground blk pepper
3 medium poblano chile peppers (stemmed, halved, seeded)
Cilantro
Preheat oven to 400 degrees. In a food processor combine tomatoes ½ cup of onion, jalapeno, garlic and ½ tsp. salt. Cover and process until smooth. Pour into a 3 qt. baking dish. In large bowl combine beans, 1 cup cheese, water, corn meal, rest of onion, cumin, salt and pepper. Stuff each pepper with 1/3 cup of the bean mixture. Place filled poblanos on top of sauce. Spoon remaining bean mixture over poblanos. Cover with foil. Bake for 30 minutes. Remove foil; sprinkle remaining cheese over all. Bake uncovered for until cheese is melted, about 5 minutes.
It was a tasty dish. G initially said it’s a bit weird the recipe doesn’t call to first blanch the peppers before stuffing & cooking them. But he followed the recipe. In retrospect he said that he wished he would of followed his gut, without blanching the poblanos tasted a bit bitter and also were tough to chew. We were out of cornmeal so G substituted ground polenta instead (which is essentially corn meal) but I’m not sure if it was because of the switch or not but I wasn’t a big fan of the texture of the dish. It was definitely mealy. G also makes some stuffed pepper with quinoa, and substituting quinoa would have been better I think. 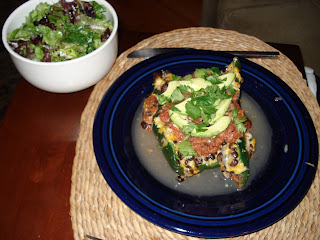 We loving cooking new things as much as we can and doing this brings hits and misses. This one was somewhere in between. But for a Wednesday night in the middle of a crazy week it was a “good play.”
Posted by Unknown at 12:53 PM

Email ThisBlogThis!Share to TwitterShare to FacebookShare to Pinterest
Labels: recipe