Yes, our Winter Break life of leisure is long gone now. We’re back in the usual weekly grind. Which usually means regularly homemade cooked meals but far less elaborate and now that we’re trying to live the Monday through Thursday “Healthy Lifestyle” again, no wine! Arrrghhhh.
It’s Thursday which means we’re almost through our first week back. It always seems the most tiresome after a break for some reason. It’s a typical rainy, gloomy, damp & cool Tacoma January day. This equals a need for comfort food. 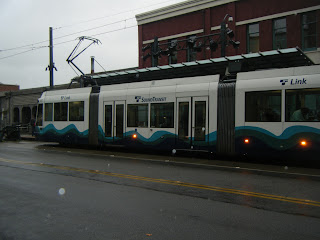 Now tonight’s a not so late night of coming home 7:00ish but G has a late meeting so it’s a do it on my own kind of night. And G is usually so much better at the comfort food thing than I am. So tonight I’m in the mood for some kind of chicken soup. Of course following the healthy weeknight plan something on the lower fat side is also an idea to keep in mind.
I turn to one of our favorite, among many, cooking magazine subscriptions, Cuisine At Home (our ultimate all time fav. No ads, just recipes, full color pictures, we’ve made many a hit of a meal from this fav of ours. We’ve subscribed continuously for 13 years. It’s the only food mag that we do still save. The rest that we recycle after we’ve made what we think looks good and then search for recipes on line as most of them are available online since we do subscribe.)
I find a Thai Coconut Chicken Soup with rice stick noodles in the Cuisine At Home Lite version. Looks good, total time 35 minutes, 325 calories per serving; this fits the weeknight bill. I figure let’s give it a try. 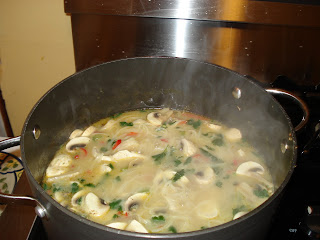 Thai Coconut Chicken Soup
2     tsp. extra virgin olive oil
1     Tbsp. minced red chile pepper
2      tsp. minced garlic
1      bunch bok choy, chopped leaves, stems separate
4      cups chicken broth
1      can light coconut milk
2      tsp. curry powder
4      oz. wide rice-stick noodles
¼     cup minced cilantro
10     oz. thinly sliced chicken breast, seasoned w/ salt & pepper
2      Tbsp. fresh lime juice
¼     tsp. salt & pepper
Heat oil in large pan over medium heat. Add 1 Tbsp chile, garlic, and bok choy stems. Saute’ until fragant, about 5 minutes (SMELLS WONDERFUL). Stir in ½ Cup broth scaping brown bits. Stir in remaining 31/2 Cups broth, coconut milk, and curry powder. Bring to simmer. Stir in noodles, cook until soft, about 3 minutes. Add Bok choy leaves, chicken, and cilantro; simmer until chicken is cooked through, about 5 minutes. Remove soup from heat; stir in lime juice. Season soup w/ salt & pepper; garnish with chile pepper slices.
I had to do some improvising along the way; didn’t have bok choy, not up for a run to the store after finally getting home and into my comfy clothes. So replaced bok choy with fresh mushroom slices and some chopped red pepper strips for some crunch.
G makes a fantastic version of our favorite Tom Kha Gai Soup (Thai Coconut Chicken Soup) and it has mushrooms so I think as it was cooking I started having that craving in my mind and unfortunately this didn’t fit that bill. But that recipe would not of met our “weeknight healthy” regime.
I added extra curry powder and a dash of hot curry powder too being that I love spicy. It was good. It was comforting enough. I overcooked the chicken a bit (it felt weird to just put raw chicken in with the raw veggies so I think I may have went over the suggested 5 minutes because of that. Don’t do that.) I should of added a bit more salt and went a little lighter on the squeezed lime at the end. But overall it fit the bill. And there’s plenty for both of us to take for lunch tomorrow too. Always a plus. We’ll see what G thinks when he gets home to give a try later tonight. 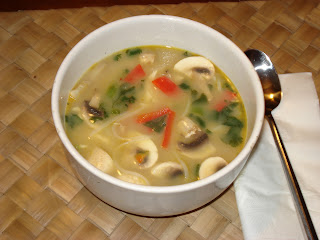 And with absolute excitement…"Thank Goodness Tomorrow Is Friday” and wine and a bit of “not as healthy” food can happen over the weekend. But for now it's off to have a nice cup of hot spiced chai tea. Oh truly; thank goodness for weekends!
Posted by Unknown at 10:01 PM

Email ThisBlogThis!Share to TwitterShare to FacebookShare to Pinterest
Labels: Thai