It was the kind of Friday an elementary principal can’t really imagine, usually Fridays keep me running, literally; no students, no staff, no horrible phone calls to be made home informing a first grader’s grandmother that she had brought horrific pornographic magazine pictures to share with at least half of her 6 year old classmates. No mediation of 5th grade boys fighting over whether the 4-square ball was in or out. No figuring out  how to cover for the two teacher’s whose substitutes didn’t show up. No explaining to kindergarten boys why scratching your friend’s face and making it bleed just because he didn’t want to be on your “transformers team” at recess wasn’t appropriate. Yes, it was a perfect Friday that my teachers & other staff had off to compensate for their late night conferences and I was able to get caught up on two weeks of tasks piled high upon my desk.
It was such a low key Friday that I had thought Happy Hour at Matador was in order, was craving their cranberry margaritas and haberno prawns. But G reminded me we had been out 2 nights in row and had only eaten 1 meal at home all week because it was another week of late nights packed with professional development training, district budget crisis community forums and an enraged school board meeting full of emotional high school students begging the superintendent not to close their school.
We have just joined the “Gutsy Cooks Club” recipe blog this week and need to try out and document our first recipe; Chicken Croquettes and the recipe looks pretty easy and sounded like homemade chicken nuggets so we decided this might be a “cook at home kind of Friday night” which would allow us to try the recipe. This is rare. Fridays usually equal happy hour dinner, take out, or our favorite cheese, salumi, baguette kind of meal.
So we ran up to the store picked up a rotisserie chicken, the recipe calls for leftover chicken, obviously having not cooked since Monday we don’t happen to have chicken left over. Rotisserie chicken might be the best supermarket trend I know of for an at home cook.
The recipe made me a bit nervous from the start given I’m not a big deep fried home cook. Don’t get me wrong, I do believe worms would taste good deep fried. My issue is the mess and the smell of the entire house after deep frying. But that’s what I signed on for by doing Gutsy Cooks was to try things I might not try otherwise so we went with it. 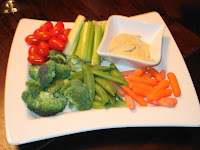 After returning I turned the ipod to our newly downloaded Country Strong soundtrack (saw movie last weekend, loved it. I used to hate country music but our friends J&J have slowly converted me somehow), put out some veggies and hummus for us to snack on as the chicken sauce
has to cool completely before you make the croquettes and poured a glass of Walla Walla Scholarship red wine made by College Cellars. 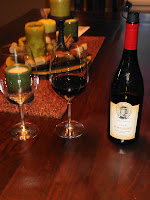 It’s a great concept, Walla Walla College has a wine program and the wine made by student, using some of Washington’s best grapes, is then bottled and sold which helps finance the program in return. Pretty good for a $10 red table wine.
I happened to have some breadcrumbs left that I had pre-made for a meal last week. So I started out using thoses but ran out after the first four croquettes and switched to using panko crumbs to finish. My guess is my croquettes were much bigger than they were supposed to be. You are supposed to use to spoons to shape them and I'm not nearly coordinated enough to pull that off so I ended up just plopping a spoonful into the crumbs and shaping them that way. Quite messy and also left mine not uniform and large.
Since the chicken croquettes seemed so much like chicken nuggets iniatially we  decided to make some of our favorite homemade truffle fries to accompany them: roughly sliced russet potatoes, peel left on, coat and shake with olive oil and truffle salt, bake in 500 degree oven for 25ish minutes ‘til golden brown. And we also made a green salad with romaine hearts with avocado, red onion, grape tomatoes dressed with Whole Foods Chipotle Ranch. I feel like we rarely eat anything green lately. 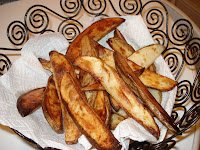 We sat down and ate our meal and watched the Social Network movie I’ve  wanted to see since it was still in the theaters. The chicken croquettes were different. Actually with each bite they were a bit better. I definitely am not experienced with the deep frying aspect so they were possibly too dark but definitely crispy on the outside. The middle texture took a bit of getting used to as it was still moist, almost like the inside of a chicken pot pie without the veggies maybe, but much richer. Since we anticipated them being more like chicken nuggets we served them with a haberno dip, but it  wasn’t needed the inside was very flavored and not at all dry. 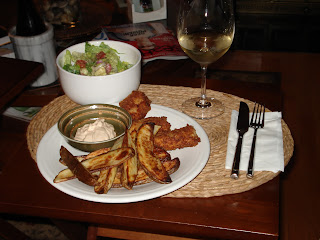 Our fries were good as they usually are G thought I went too light on the truffle salt but last time I used it I went overboard so I was being conservative. If you’ve ever used truffle salt you know it can be pretty pungent.
We enjoyed a bottle of ’09 Barnard Griffin Roussanne. We’ve been Barnard Griffin wine club members for six years now. They really make some wonderful wines that we always enjoy. It’s one of the wineries we always hit during our annual Tri-Cities wine trip with friends. Roussanne is a new varietal for us. Actually lately we’re really started to like it more and more. For the Tacoma Christmas boat parade watched at a friend’s condo we ended up having an impromptu magnum night. We brought a magnum of Trust Syrah and our dear friends L&J brought a magnum of Alexandria Nicole Roussanne. And since then Roussanne has been a white we’re trying to sample more of. Tonight’s bottle was very good, balanced a good pairing for the rich chicken croquettes.

We are excited to continue on our Gutsy Cooks venture because this is exactly what we needed, a specific purpose to keep us trying new recipes and foods. We still have a Tarte Tatin recipe to make this weekend too. But doing that on Friday night as well wasn't going to happen. I actually told G I really can't remember a work week Friday that we've made dinner in maybe years. Possibly even a decade.
It’s also helpful because G has been wanted to do something similar but cooking with Rick Bayless recipes. So we’ll learn from this experience how we might want to get started with that.
Posted by Unknown at 6:00 AM