G skied today. I stayed home to wait for the Sears guy to come finally fix the burner that went caput on Thanksgiving. After a wee bit of a couple blowout over G inviting his skiing buddy to  into our house in the middle of my workout to watch the Seahawks game finale with no warning, nothing...needless to say after being a bit embarrassed, interrupted and hot we moved on and made a great dinner together.
I found a good-looking Frenched lamb rib roast at Costco today during my errands. We have actually only made lamb a few times ourselves. I've ordered it restaurants several times but just never really felt like I'd be able to cook it probably. It was actually one of our Supper Club meals at our friends in Covington that prompted us to try making lamb on our own a few years ago. Supper Club is always a motivator to give things a try.
While starting to prepare our meal after talking through the dispute and moving on we drank a glass of Reininger White Helix "Aspersa" Columbia Valley 2009 purchased during our anniversary in Walla Walla. It was a bit too cold when we drank it so descriptors are difficult. It was crisp, a bit effervescent and okay. When we finish the bottle hopefully we'll appreciate it more. Really I opened it as our recipe called for a bit of white wine and we tried a glass.

We made, a food network recipe; Lamb chops with thyme, honey & whitebeans. We both loved the lamb. G made his homemade Caesar Salad Dressing & croutons to put together a salad for us. And we opened a Matthews Red Mountain Syrah, 2005.
G's salad was his usual very pungent, lightly dressed Caesar. His toasted croutons gave the romaine just a bit of crunch to pull the salad all together. When we first started dating this was G's go to dish for gatherings. It had been many years since he made his salad. He forgot how pungent his recipe is. 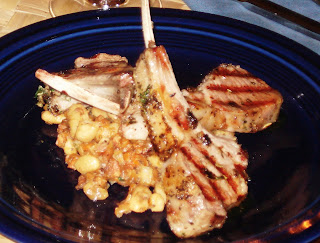 The lamb chops turned out beautiful, although when I did slice them into individual chops after being in the oven they were still very rare so I put them back on the grill pan for just a few minutes. Which gave them a little more sear and flavor but they were still  rare which I think made their flavor excellent. The honey drizzled on top really made this dish we both agree. But a bit of lamb with the white bean and bacon side was a delicious mouthfull.

The Matthews Syrah was big almost port like. The temperature needed to come up a bit probably before we drank it. We cellar our reds in our basement and in the winter it gets just bit cold that we usually bring bottles up and let them sit upstairs for the day before serving for a more true taste of the vino. It complimented the lamb dish well though. We had bought this bottle during our 9th Anniversary celebration in August 2009. We had went to see David Gray up at Marymoor Park in Redmond, stayed all night and then spent Sunday tasting up in Woodenville. We had a great day. Matthews tasting room is in a large industrial park with many other wineries. It was a hot day and a few too many tastes were consumed by T that day. G ended up eating the rest of his dinner alone at Purple that night because T over indulged and had to nap in the car after appetizers. (Funny but embarassing story.) 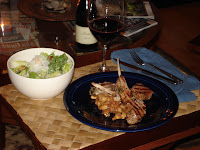 Another great meal with wine for us on this January Saturday night.
Posted by Unknown at 12:08 PM