As purposely planned this year we pulled off a very quiet evening for two to ring in 2011. We started off with a glass of wine at our fav local wine bar down the street Pour at Four. G had the Mathews Claret, T the Otis Kenyon Cab.﻿﻿﻿﻿﻿﻿﻿﻿﻿﻿﻿﻿﻿
﻿﻿


We then came home and started preparing our meal. While cooking we enoyed a bottle of Solena 'o4 Syrah, Del Rio, Rogue Valley. (Solena Cellars is a favorite stop during all our Willamette Wine trips in Carlton, Oregon.) It was perfect to keep us focused on creating our meal. 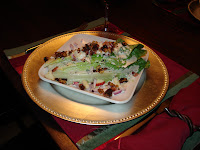 ﻿﻿T made a Romaine Wedge salad with apple, red onion, smoked bacon and a creamy mexican ranch dressing. Topped with chile glazed walnuts. It was good, but T believed it was just missing something, maybe something with a sweet note to compliment the heat better. G thought it was pretty good the way it was. (Of course
G was just excited T didn't use a recipe, he believes we don't always need a recipe. T believes her food turns out better when a recipe is followed.)
We then proceeded to make our dinner. First G decanted a bottle of cab that we've been sitting on from a 2005 Walla Walla trip, Pepperbridge '02 Cabernet Sauvignon to accompany our meal. T made some Snake River Farms American Style Kobe beef rib eyes. Several years ago we tried an Ina Garten recipe for Steak House Steaks with a blue cheese sauce that T believes is the best steak recipe that we use.
G made a Fine Cooking recipe he'd been wanting to try, Browned Cauliflower with Anchovies, Olives & Capers. He also made one of his favorite dishes; Porcini Mushroom Rissotto.

We were very happy with our meal and menu as a whole.
We played a bit of after dinner Wii tennis & golf to work off our overstuffed feeling and make it through to midnight. Tough for us "usually asleeep by 10" kind of couple. 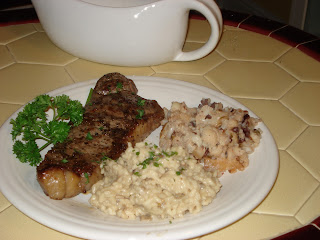 But we made it through to toast in the new year with a sip of T's fav Sophia Blanc to Blanc sparkling wine.