Indian & Thai are two of our favorite cuisines. We have long made many Thai recipes but have just recently ventured into making Indian dishes in the past year and a half. So finding this combination of Thai and Indian recipe for Indian-Thia Fusion Chicken on On and Off My Plate was right up our alley.
The fact that it was light and not laden with the typical coconut milk, cream or butter was perfect too since the past few days have not lent themselves to overly healthy eating for us.
G skied Saturday but came home early because conditions weren’t ideal. When he came home I had just put the spice seeds in the oven to roast and he wanted to help. He played helpful sous chef mincing garlic, lemon grass and ginger and then grinding the seeds once they were roasted. 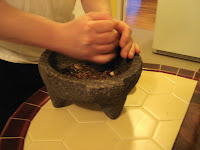 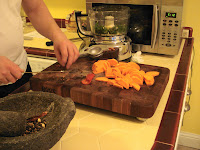 We had half a rotisserie chicken left from the night before so I decided we’d use that instead of cooking chicken breasts. So I chopped the chicken into cubes.
Our fusion curry paste appeared not very pasty because the lemongrass wasn’t minced or mashed enough so we ended up going through a few extra steps to get to where we thought it would be more easily edible.
We also made the Cardamom Sweet Potatoes and a spinach salad to along with it as those sounded like the perfect accompaniments to the curry.
Just before serving the chicken I also added some greek low-fat yogurt, I added a little more than 3 tablespoons hoping it would help it be a bit more creamy. 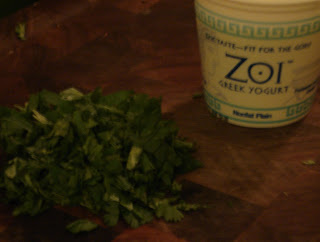 We opened a Spanish bottle of Syrah, Fedriani Laffitte, that I found at Metropolitan Market while picking up my spices. Syrah is a great match for spicy food, as well as my personal favorite varietal and I don’t believe I’ve ever had a 100% Spanish Syrah so it needed to be tried.
We loved our meal. It had all the flavors of our most loved Indian dishes but not the stomach turn that often occurs from the butter for me. It as a meal that felt light, comforting and complete. 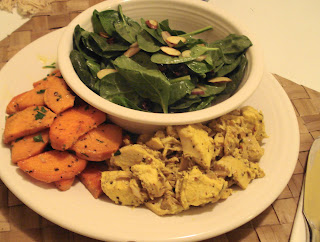 The Spanish Syrah was also perfect for the meal. It was much lighter than Washington Syrah so it really did pair well while being a red with a light meal. We both agree this is a curry dish that we’ll return to. We ended up freezing the remaining half of the Fusion Curry Paste so it’s even something we could pull off on a work night. 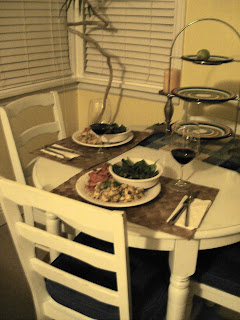