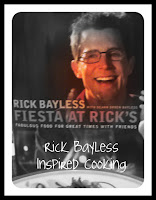 Our 2nd week of Gutsy Cooks Clubs' month of Rick Bayless inspired meals was one we were looking forward to. G looked through the recipe choices and lobbied to make the short ribs recipe. He didn't have to lobby too hard. We both love short ribs. So we made Rick Bayless' Short Ribs Kabik (recipe available on his Frontera website.)

For us short ribs is usually a hearty, cooking all day on Sunday kind of event. And although our weather has definitely taken a turn it's still not worthy of our typical short ribs preparation.
We kicked off our meal enjoying some of Rick's Roasted Habernero Salsa and chips that we picked up at the market. It kept us nourished while cooking.

The first step was to roast our peppers & garlic.

The recipe called for some hot banana peppers. One of T's teachers had given her just such a plant for principal appreciation week last spring which provided us with 2 of our peppers. The others we did have to buy at the store.

Ours were just a bit wimpy compared to the purchased ones indeed.But we were excited to actually use a few of our own.

Since we were not using bone in short ribs that need a lot of time to cook we made a few adjustments to the recipe.

The first adjustment was to do a spice rub on the ribs since they wouldn't be absorbing all of the wonderful chile flavor as they would if they cooked in the sauce for a few hours. G rubbed them with a mixture of ancho chile powder and a mexicali herb mix before searing them in the dutch oven. Just long enough to get brown on each side.

We then set them aside.
Next made our sauce with fire roasted tomatoes, the roasted banana peppers and garlic.

( in retrospect we wish we would of either chopped the green pepper a bit smaller or roasted it along with the other peppers.)

The sauce was immediately colorful and sure to be full of flavor.
We were not successful in finding achiote seasoning this time (G's is going to go to the east side this week as he's determined he can find it in one of the Mexican markets.)

We got gutsy and substitued a chipolte pepper with a teaspoon of white vinegar to create another layer of chile flavor to the sauce in place of achiote paste the recipe calls for.
We let the sauce do it's thing while we made our side dish.
Rice with Roasted Poblano, Spinach and Fresh Cheese.

Rick's Mexico One Plate At A Time cookbook.
We chopped the roasted poblano,

some of the roasted garlic and spinach.

The first step was to fry

the rice and onions as Rick calls it.

Then we added the chicken broth and poblano.

Very simple. It cooked about 20 minutes before we added the spinach and fresh Mexican cheese.

We also made the Salpicon topping of fresh green onion, chopped habernero and fresh lime juice. (This was spicy but so good.)

By this time our chile was smelling amazing and we put the short ribs into the dutch oven to absorb some flavor. But only for 5-8 minutes because we didn't want them to overcook and get tough.

This was by far one of our favorite Rick Bayless recipes we've made yet and we've made a few. The sauce was wonderful...layered with flavors. The salpicon was fresh and hot at the same time. And the Rice with Roasted Poblano, Spinach and Fresh Cheese was the perfect compliment to the dish.

I mean we can't wait to make it again. And we rarely make a recipe twice unless it becomes "a fav." And this one is for sure "a fav."
We served our meal with Brian Carter Cellars 2008