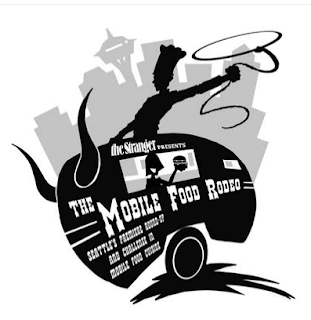 With the food truck craze only getting more & more prevalent when we came across the advertisement for the Seattle Food Truck Rodeo in the Seattle Met magazine when knew we were all in.We called my sister & Mike to see if they were up for it and we all went on line and pre-purchased our tickets.
G had been reading for sometime about The Maximus Minimus & Skillet trucks so when he saw that both trucks were to be there he was pumped to finally get to try them both.
The Saturday of the event we headed up around noon figuring we already had tickets to get in so no big hurry to get up there. Not exactly the case when we arrived.
Tracy & Mike arrived first. They called & told us the line was crazy, possibly a few hours long...curious about what we thought we should all do. Since we had already purchased our tickets we wanted to at least check out the situation. We amazingly found some free 'on the street' parking. The line was pretty crazy indeed.

It really didn't make much sense. Everyone, whether you had pre-purchased tickets or no tickets , was in the same line...not sensible. But eventually the line started to move. Some guys started working through the line putting on wristbands. Again no clue why we even needed wristbands...but more about our suggestions for future improvements later. 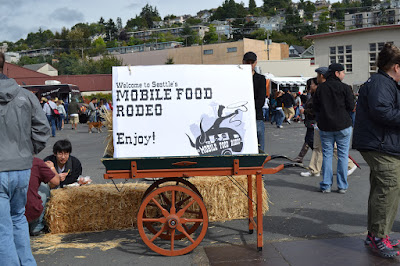 We get in and its PACKED with people, the lines for every truck are ridiculous long. At first its a bit overwhelming how to even get started..you couldn't even really see where the lines ended & which line was which...it was very chaotic to say the least. 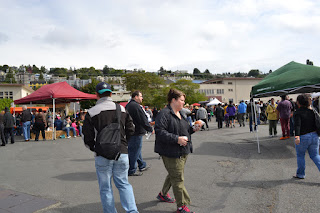 But we quickly got our plan together to get in at least 3 different lines to start...G & Tracy got in the Maximus Minimus line initially. 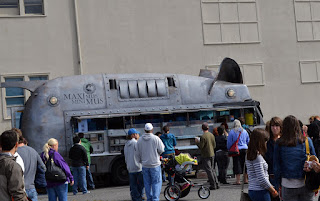 I mean how could you not be curious about what might come from this truck... 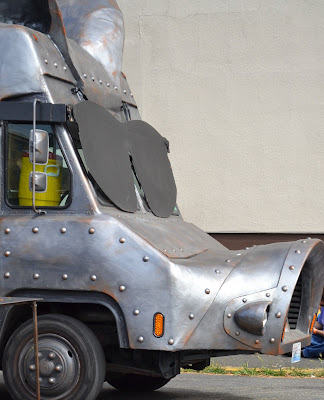 If you guessed pork you'd be correct. In addition to some amazing mac & cheese (the truck is owned by the famous Seattle cheese makers Beechers.)
We  bought 3 pulled pork sandwiches to share essentially (although G didn't really share his now that I think about it.) 2 were Maximus:a spicy pulled pork version & 1 Minimus: a sweeter version. 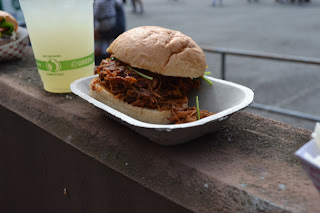 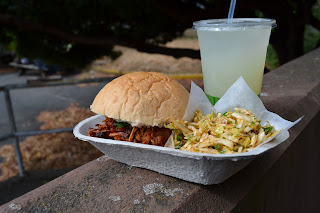 I stood in line at Curry Now. This was an equally long line. I'd guess at both trucks we waited approximately 45 minutes to be able to order. I ordered 2 small Chicken Curries. 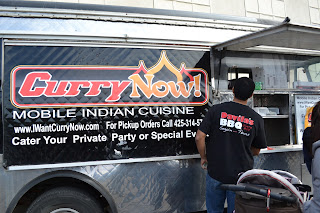 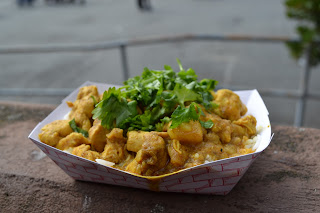 Mike went out & found Charlies truck and came back with 2 either large sliders or small burgers: a jalapeno burger & a coffee rubbed burger. 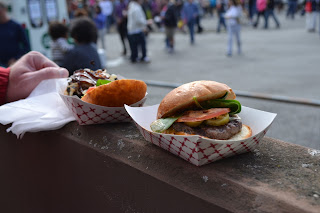 Those were our starters. After figuring out where to recycle & deposit our waste we were done with round 1. Now we were off to see what else was out there. In the time that we were in line in addition to the time took us to eat we noticed that the Skillet truck had left??? Not sure if indeed we had imagined seeing it or not.... but it was gone.
Amongst checking out all of the trucks we noticed that they were having a cupcake eating competition going on. It was slightly entertaining on our quest to find round 2. 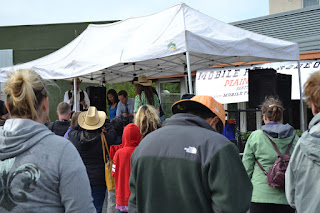 After realizing we still weren't very hungry yet we decided to get in line at what appeared to be the 2nd most popular truck (or maybe the 1st hard to tell b/c of the chaos) "Where Ya At?"  The line for this Creole Food style truck was CRAZY long, wrapping around & around. We figured by the time we made it up to order we'd be hungry.
We realized that the oyster Po' Boy had been crossed off the list after staying in line for at least 40 minutes...but we decided to go for shrimp Po' Boy instead since it was available. 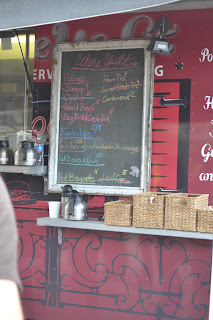 We ended up waiting in line for an hour. 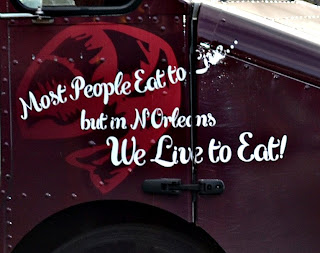 But hey with a slogan like "Most people eat to live in New Orleans we live to eat" right there on the truck how could we not stay in that line.
And the great thing was that actually by the time we made it up to order they actually had some jambalaya ready again and beignets. 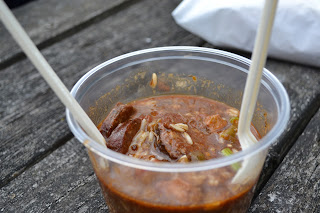 It was all good. The shrimp Po' boy was just okay to be honest...the shrimp had a strange flavor. I'm guessing maybe because they were previously frozen shrimp possibly. Not sure but the jambalaya and beignets were awesome. 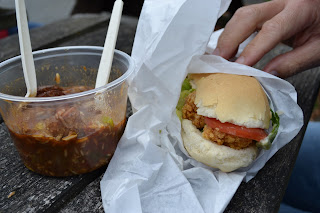 Tracy & Mike had some truffle fries & mini doughnuts while waiting in line with us.
It was a good day overall. And something we are glad that we didn't miss. 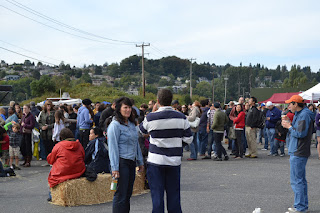 But I would highly recommend that they fire their event coordinator. It was not at all well coordinated. They needed a much larger event area. They should have had separate lines for pre-purchased, group on and purchase at the gate tickets. There was no need to have the wrist band as long as they had it gated off. Once you have your ticket you're in. Nobody every looked at the wristband. Waste of effort. And since they only had 2 people putting on the wristbands it REALLY made the line long. They also need more trash and recycle bins throughout the entire area. And they definitely need a "cans" & "plastic" designated recycling areas. I mean come on this is Seattle, I thought we were a GREEN city after all.
But we will continue to be Seattle food truck followers regardless.
Posted by Unknown at 5:47 AM