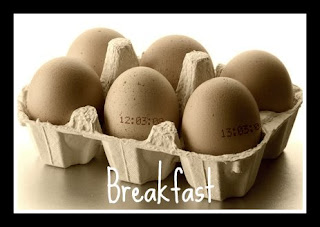 We have a few breakfast "go to" dishes in our home and "the English muffin egg sandwich" is definitely one of the few.
We became addicted to these sandwiches pretty much as a "on the ride up to the mountain" ritual on our way skiing. We'd stop by Starbucks for coffee and sandwiches to go. (We know McDonald's made them famous but we don't go to McDonald's except when on a road trip or entertaining young children so we credit Starbucks)

We make them at home quite often but usually not on our way skiing. For some reason at 5:30 in the morning making them our self just doesn't sound quite as good.
They are pretty much a no brainer: toasted English muffin, eggs (more about the eggs later), whatever breakfast meat we are in the mood for or more truly what we have bacon, ham, or in this case chorizo and cheese, again whatever kind we have or are in the mood for this version was made with cheddar.

When we first started making these sandwiches we'd usually fry the egg. But this weekend I found the perfect egg sandwich gadget.

It's a perfectly shaped & sized container egg cooker. You scramble the egg into it, add a little salt & pepper.

Pop into the microwave for 45 seconds and voila the perfectly cooked and shaped egg for an egg sandwich.
I was excited with my find. Now to tell you the truth we didn't need this gadget at all. A few years ago I found that if you spray a small ramekin with cooking spray, scramble the egg inside, cover with a paper towel and cook in the microwave it works exactly the same.
But the gadget is fun and hey it saves a paper towel so it's Green. (Does that justify the non-needed purchase? I hope so.)
Chorizo & Egg Breakfast Sandwich
Bulk Chorizo sausage
English Muffin (1 per sandwich)
Sliced cheese of your choice (we typically use cheddar, pepper jack or provolone)
1 egg per sandwich
Salt & Pepper
Shape chorizo into patties. Cook in skillet until done. Toast english muffins. Scramble egg into round appropriately sized bowl (small ramekin works great), add dash of salt & pepper. Cover & microwave for 45 seconds to 1 minute. Top english muffin with egg, chorizo and a slice of cheese. Place open faced into broiler safe pan and broil until cheese melts.
Posted by Unknown at 5:21 AM