There is no more intense time of the school year for a principal & a teacher together than the few weeks prior to school starting and the first month of school. Throw in the possibility of a teacher's strike when you've got one administrator and one teacher living in the same house and you've got not a lot of time and definitely not a lot of cooking going on. Which is why we haven't posted in some time. But here's a yummy recipe from several weeks ago before the full craziness ensued.

We've been attempting to take advantage of our local farmer's markets as much as we possibly can before summer's end.
One G's favorite stands at the 6th Avenue afternoon market is the shellfish guy.
G convinced me to make it home before the market closed so we could walk up and buy some of his fresh oysters for dinner.
He had evidently been dreaming up this starter all day.
Earlier before we walked up to the market he had made this amazing roasted red pepper sauce to put on top of the oysters. To be honest when he first told me about it I was cranky in saying "...but I like to have a horseradish sauce with the oysters..."he ignored me thankfully and said, "Don't worry you'll like it."
It was a beautiful afternoon for a walk to the market. When we arrived we found the shellfish stand and he had two different varieties of oysters. One was pretty large (which to me being a new to liking oysters kind of person) made think "ohhh slimy." So had some discussion about the larger verse the smaller and compromised on buying 6 of each. 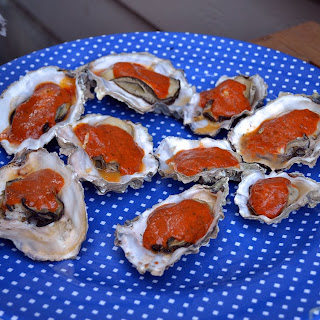 We got them home and on the grill. Just after a few short minutes they were starting to steam and open open.

We had them with his amazing sauce and they were absolutely delicious! A must on the grill if you an oyster liking kinda person.

We served them with an Oregon Pinot Blanc from Erath.
The oysters were gone in no time.