Rick Bayless is one of our chef heroes even long before becoming TVs Top Chef Master. We’ve followed his PBS cooking series, have just about every one of his cookbooks and have eaten at all 3 of his Chicago Restaurants: Frontera Grill, Topolobampo and XOCO. We’re true fans and followers I guess you might say.
﻿
﻿We had the most amazing dinner at Topalabamba with my sister and her boyfriend several years ago. We’ll never forget his trio of ceviches’ and goat empanadas from that meal. T also swears she actually saw him in the restaurant when she came out of the restroom. Since she’s the only one that was there this wasn’t verified by anyone else. Last year while in the windy city we tried Rick’s latest Chicago restaurant  XOCO. It’s more street fair food with some great tortas so while being low key and accessible Rick still comes through with great flavors. ﻿﻿﻿﻿﻿﻿

So being the Rick Bayless fan that I evidently am, I decided to cook something from his latest cook book, Fiesta at Ricks the newest to our collection, one or more times a month (maybe it was every week? That might be more than I can follow through with but it’s a good goal). Since the weather finally got cooler here on Sunday, braised short ribs sounded like the perfect comfort food to make. I decided on Braised Short Ribs with Arbol Chiles, White Beans, Mushrooms, and Beer. This recipe is actually on his blog as well if you’re interested in trying it out. Braised Short Ribs with Arbol Chiles, White Beans, Mushrooms and Beer
I love the smells that emanate from the oven during braising. This recipe incorporated dried chile de arboles with a garnish of cilantro to give it that Mexican flare; otherwise, it was more American comfort food.
﻿
﻿

Next, the onions were added to soften before all of the other ingredients were added:  one whole garlic head cut in half, shitake mushrooms, crimini mushrooms, beef stock, dark beer (my buddy Jason left a Henry’s dark here last week for the game thought I’d go with that), one can fire-roasted tomatoes, three cans of white beans, thyme, salt, and pepper.
Then it was in the oven for two-and-a-half hours to braise. To accompany the entree, I broiled some fresh asparagus coated with olive oil, salt, and pepper.
﻿
﻿We enjoyed some leftover Avalon cab (good deal from Pete’s for a mid-week sipper) from the night before (that doesn’t happen much) with our meal. 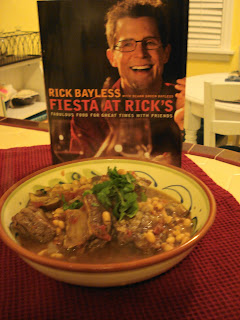 The next night we removed and shredded the meat from the bone and ate it more as a stew and it was just as delicious the next day.

I am looking forward to my next Rick meal, maybe grilled rack of lamb with honey-pasilla glaze? But T wants to go with one of the seafood recipes, so we'll see who really gets to pick the next recipe.
I toasted the chiles for about 30 seconds first, then seared the ribs with the chiles in the pot.
Posted by Unknown at 5:00 PM