Last year one of the wine club, Fidelitas, that we belong to had a winemakers dinner at Dockside Bistro in Olympia that we attended.

My sister lives in Olympia and we've had many meals out in this town about 18 miles south of Tacoma but for some reason before that event we'd never been to the Dockside Bistro and had actually never heard of it. But we loved our experience there having dinner with our great friends Lynne & Jim and have since also celebrated Lynne's birthday there with a larger group of friends earlier in September of this year. It was super exciting to actually find out during our first dinner experience that the Chef, Cedar Martin, was now the chef at Dockside. We had become fans of his food while he was the chef at the Oceancrest Resort where we had previously enjoyed several of his meals during some fantastic winemakers dinners over the years.

So it was with some excitement that we agreed to drive down to Olympia on a Friday evening (not usually something we enjoy doing on Fridays; traffic from Tacoma to Olympia on Fridays can be down right brutal!) to  go to dinner with Tracy & Mike at the Dockside Bistro which they hadn't yet tried. 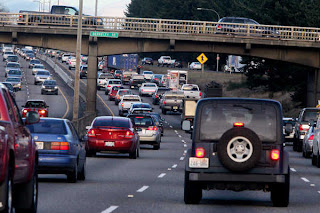 Unfortunately as we feared the traffic was brutal on this particular night it took over an hour to drive this 18 miles of I-5. But once we finally arrived we were again happy that we had.

G & I arrived first and went ahead and ordered a bottle of Nelms Road Merlot for the table. Nelms Road is the second label for Woodward Canyon wines from Walla Walla. 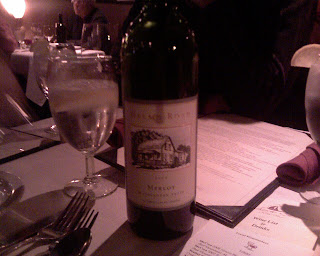 When Tracy & Mike arrived we decided we'd start off with an order of the Pernod Steamers as we were all starving.They actually had been in the car for over 3 hours coming back from Bellevue after a day of trampolining with the kids. The steamers were wonderful with wild white prawns, mussels, clams, fennel & cream. The flavor of the fennel was subtle but satisfying a great start to our meal.
The server then explained some of the specials for the night and we all decided on our secondcourse options from the specials list. The 3 of them had the salad with roasted beets over arugula and topped with a generous portion of humbolt farms goat cheese. I went with the seafood gumbo; which was okay not stellar. The flavors were rather murky and the soup came not quite warm enough as I expect soup to be served piping hot.﻿

We ordered our next bottle of wine for the table a Basel Cellars Claret. It was a good match to pair with our 4 choices of dinner.
For entrees G had one of the dinner specials of a combo of Elk steak and elk sausage with a huckleberry sauce and a potato cake. He was very happy with his choice.
I had the Duck breast from the menu  which was Duck Breast served with wine poached cranberries, pecans & roasted fingerling potatoes. The flavors were all great. I should have ordered my duck medium as opposed to medium rare because I just didn't enjoy it as much as rare as it was.
Tracy had the Butternut Squash Ravioli sage brown butter, candied pecans & blue cheese. She enjoyed her ravioli very much.
Mike had the special of seafood puttanesca which was seriously jam packed with seafood.
We were all pretty stuffed after our indulgent entrees so decided we'd all share one serving of the huckleberry buckle served with white mountain vanilla ice cream. It was delish and a perfect ending to our great meal.
﻿﻿﻿﻿﻿
Everyone enjoyed a version of coffee with the dessert but being the only non-coffee drinker at the table I decided to try the Justin Cabernet dessert wine. I am not a fan of port so this was such a treat. It wasn't thick and syrupy like a dessert wine but rather just a luscious, more sweet Cabernet.

Dockside Bistro continues to be a place we enjoy for a great meal paired with good wines.
Posted by Unknown at 12:55 PM