My sister & M were coming to dinner, what a great reason to make both of our Gutsy Cook Club assignments for the week from The Illustrated Kitchen Bible for; lamb kababs & sticky lemon cake.
After spending a few hours at school getting caught up on tasks, Saturday mornings at school with no interruptions help me keep my sanity a few times a month, I went by Costco to pick up a few random staples and thought I'd find a good leg of lamb roast. I was successful at finding a nice roast of lamb for the kababs. Next it was off to Marlene's Market to see if I could find almond flour or meal for the cake, neither of which I had  previous experience with. At first I was nervous because I looked up & down every aisle several times and could not find either one. Then I finally asked a gal stocking the shelf and she kindly led me to the bulk walk-in cooler where they had both versions. She recommended choosing the meal over the flour for the cake and since I've never used either I went with her suggestion and appreciated it.


When I got home I decided to start with the cake knowing G was on his way home from Crystal Mountain and would want to help with the lamb. So I pulled out our trusty KitchenAid (a very well used wedding gift from a previous teaching partner. Although we've lost touch I still think of her each time I use this great kitchen tool.)
I then started to realize that we don't have a cake tin in our home, did I mention that we rarely bake or least used to rarely bake...this makes 2 weekends in a row...so who knows. After finally deciding to not run up and buy a cake pan I instead chose to use my old pampered chef stone pie baker instead (hidden and rarely used, forgot we had it actually.) 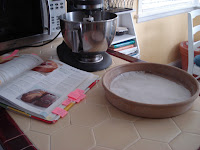 I first buttered the pan and lined the bottom with parchment as directed. I zested the lemons with my handy microplane, love this gadget and squeezed my lemon juice. I thought I was off to a good start.
So each part of my continued steps probably led to the result. First I realized my butter nor eggs were at room temperature which I do know to be recommended for baking but I figured the butter would soften up while being creamed with the sugar. I added 2 eggs and 1 additional egg yolk, but didn't beat them in separately as suggested. My batter didn't quite look light and fluffy as the cookbook predicted(...mmm did I mention I don't bake.)
I then sifted the almond meal with the flour and baking powder and added them to the batter with the yogurt and the lemon juice. The batter tasted pretty yummy but  the almond meal left a "mealy" texture.
I put the cake in the oven and baked it at 325 for the recommended 30 minutes. When I first removed it from the oven it didn't quite spring back when touched nor was it golden brown like the photo in the cookbook so I put it back in the oven for another 5 minutes.
I finally decided to just take it out and see what happens as I was poking the holes for the lemon syrup I could feel it wasn't fully cooked so I put it back in the oven for another 5 minutes + 5 minutes + 5 more minutes...and thought okay this just needs to be done.
I poured on  the lemon syrup into the little poked holes and let it  rest for 30 minutes before plating it.

It definitely looked nothing like the photo in the book still....the book's cake is very yellow, spongy looking almost and much thicker. Arggghhhhh....oh well I thought we'll just have to see how it tastes later.
G got home he started toasting and grinding the coriander seeds for the lamb and started unwrapping. I ended up buying a roast twice as big a the recipe calls for, you know Costco, so we divided it in two and froze the rest for a future lamb stew or something we're thinking. I took off some of the extra fat and cut the lamb in chunks.
G put together the marinade of oil, honey, garlic and lemon and we coated the lamb chunks and put them in the fridge to marinate...easy really. I made the tomato & cilantro vinaigrette, it smelled great. 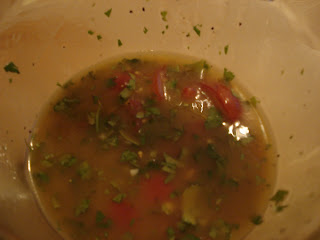 Tomato & cilantro vinaigrette  I then went on epicurious to find the raita recipe as Monica from Sweetbites suggested and a rice pilaf recipe that sounded like a good fit as well. Both recipes are linked: raita & rice pilaf.
G opened a bottle of Trust Syrah as we both thought Syrah would pair well with the lamb for dinner and of course I personally think Syrah is the best varietal Walla Walla makes. 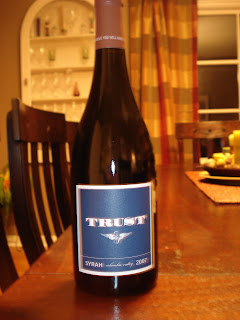 But he also put out a bottle of an 2007 Olsen Estates Rouge des Coteaux
and our favorite weekday Garnacha de Fuego 2006 to have with the cheese &  cracker appetizer I put out for my sister & M to have something when they arrived.
My sister helped me skewer the lamb for the kabobs, I had soaked the wooden skewers a few hours to prevent them from catching on fire on the grill. We decided to add some tomatoes to give them some color too. G then went out and turned on the grill. Of course just when I went out to grill the kababs it decided to start raining. Gotta love Washington in February.﻿﻿
We sat down to a great feast. The lamb was cooked perfectly, tender with a nice but subtle flavor. About half way through the meal I remembered to pull out the tomato/cilantro vinaigrette..ooops. The raita was actually the big hit with everyone and the pilaf was so good. I will definitely make all of these dishes again and again I predict. The syrah was also a great pairing with the meal. 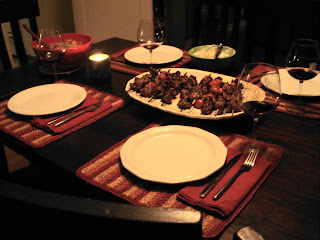 It was finally time to give the cake a try. We decided to open a bottle of dessert wine made by our "winemaker friend JMac" who is becoming a novice wine maker.
The cake while not pretty was very good. The almond flavor was wonderfully noticeable and the lemon gave it both a sweet but sour taste too. It was definitely denser than I think it was supposed to be and wouldn't win any baking contests but it was really good. The dessert wine was very sweet for my taste but not bad with the cake. 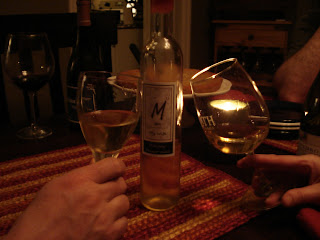 Another great meal inspired by the Gutsy Cooks Club, shared with people we love.
Posted by Unknown at 6:34 PM