Over the weekend we made lasagna which was another one of our Gutsy Cook Club assignments. We haven't made lasagna in years. Lasagna isn't a good "go to" usually when you are mostly cooking for just two so this was a good excuse to make it again. This version is basically a roasted vegetable lasagna we discussed whether to add some spicy Italian sausage but decided we need to go back to our couple nights a week vegetarian attempts.
We were both under the weather this weekend which meant a lot of Food Network and the Cooking Channel was watched. We watched Kelsey's Essentials on the Cooking Channel and she made homemade pasta which inspired G to make fresh pasta for our lasagna.

We followed her technique this time. In the past I had made the dough in the mixer so this was a fun challenge to make the flour well and what not. 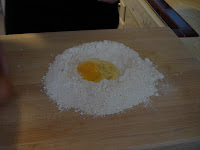 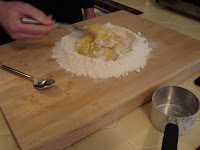 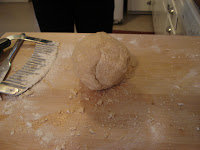 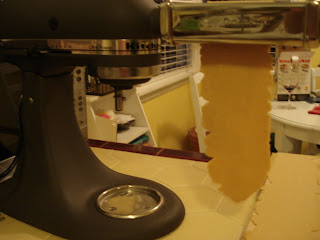 We used whole wheat flour which was also something we just thought we'd give a try. Our lasagna noodles came out just fine.
I then made a red sauce using a few types of canned tomatoes; pureed, fire roasted and diced. I like a thicker red sauce. We first saute'd some garlic and shallot in olive oil. Added the tomatoes and oregano, thyme, red pepper flake, salt & pepper and finally fresh basil. 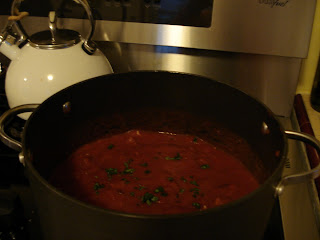 We roasted the eggplant, red pepper and portabellas in the oven. This was a quite a process today. I had cleaned our self cleaning oven which it desperately needed but forgot how long it takes and then how much longer it takes for the oven door to unlock because the temperature has to come down before it will unlock. But it all worked out fine in the long run. I was starting to worry we'd be eating lasagna at midnight. 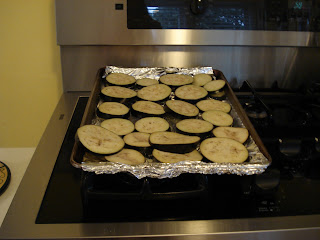 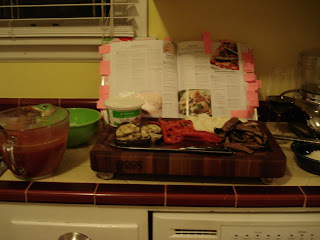 I started the first layer of lasagna with putting down the sauce then the fresh pasta topped with veggies, then ricotta & mozzarella layering until finished. I used fresh mozzarella because nothing is better in my mind. And then baked the lasagna for 30 minutes covered in foil and then 15 minutes uncovered. The recipe didn't call to mix the ricotta with eggs or anything like I've done in other versions which made the ricotta difficult to spread, should of went with my gut and did that anyway. 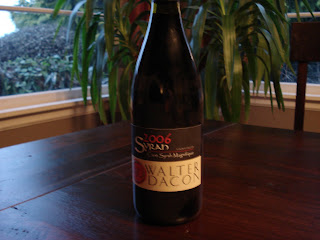 My sister had actually purchased a special wine tasting for a group at a school auction  a few years ago that they ended up being unable to attend. So we benefited, took a few friends, spent the afternoon in Shelton of all places and ended up loving this Syrah. This was the last bottle of it left in our cellar. It was a good complement to the rich flavors of the lasagna. 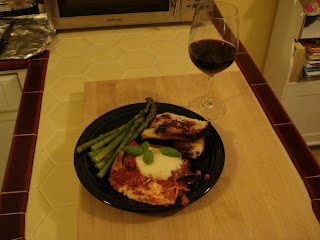 It was a good Sunday Night meal. And we'll be having lasagna a few nights this week as well as putting half in the freezer for a later date.
Posted by Unknown at 7:11 AM