This week for Gutsy Cooks Club one of our recipes was the Indian inspired dish Chicken Biryani. This was immediately right up our alley. We LOVE Indian flavors & aromas.And even while writing this I can still smell those amazing aromas waifing around in our house. If only smell-o-vision existed you'd see what we mean about these flavors.

Snow finally came to Western Washington which meant coming home after school before the ice and dark hit the streets was important and this allowed us to have a leisurely evening to do some cooking so we thought we'd go with one of our GCC recipes for the week. 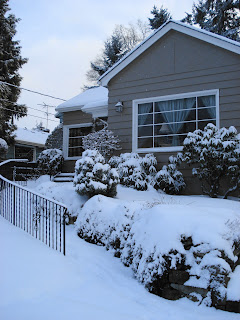 Now my initial plan was to come home workout and then start cooking. But G had a different idea and immediately opened up the Barnard Griffin Pinot Gris. So of course the working out idea got lost in the mix. Barnard Griffin is a very popular Columbia Valley winery that we've been wine club members of for many years now. We actually served their Fume Blanc at our wedding, a great everyday summer on the patio wine. This pinot gris is great with spicy food. G thought he would of liked to try a Riesling to really balance the heat but this dish really wasn't that spicy. 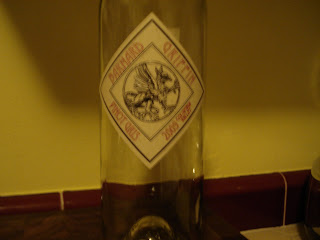 I love any version of chicken & rice, it's somewhat ironic that even all of these years after teaching 1st graders how to read when I make or eat any version of the dish I still think of Maurice Sendak's book Chicken & Rice and smile as it was one I read every year to kick off a new month. 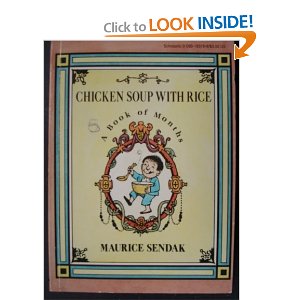 Every culture has it's own version of the dish. A few we've made ourselves include; red beans & rice, arroz con pollo, chicken fried rice, Puerta rican chicken & rice and the list goes on. But throw in cinnamon, cardamom and my favorite curry I'm salivating just reading this indian version of a recipe.
We decided to make it a full meal experience given the luxury of several extra hours on this particular evening. I experimented with making some paneer stuffed dates and roasted curry cauliflower.
We gathered our ingredients together. Sadly due to the snow issue heading over to east side of town to an ethnic grocery wasn't possible so curry leaves weren't accessible tonight so curry powder would have to suffice (although we have bought the leaves them at the Asian grocery before.) We chose to use chicken thighs as opposed to breasts because they tend to be both less dry & more commonly used in authentic indian dishes. 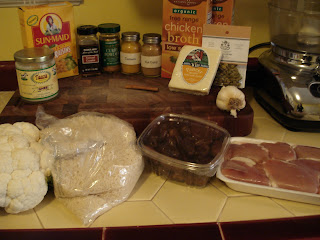 We've been experimenting with many yummy versions of stuffed dates over the past year. So I thought why not try to stuff some dates with the indian paneer cheese from one of favorite dishes Saag Paneer? 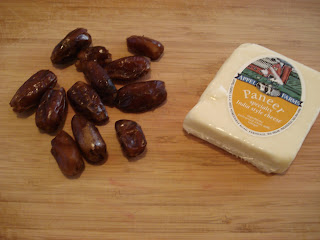 Jason & Jodi introduced us to one of our favorite treats of roasted cauliflower with just simple evoo with salt & pepper. I thought how yummy that might be tossed with some hot curry powder, garham Marsala & curry powder added. So we went for it. Can you smell the aromas yet? They were intensely wonderful.
G cubed the paneer and stuffed the majool dates before sprinkling them with some curry powder & baking. I cut up the cauliflower tossed with some olive oil, curry powder, cumin & garham Marsala and the roasted in the oven.
I sliced some white onion and smashed a few garlic cloves. I then put the mixture of ghee(clarified butter)& olive oil in the pan and added the onion & garlic, spices and eventually chicken thighs, rice, raisins and broth. The aromas were beyond describable words. We toasted some sliced almonds as the topper too. 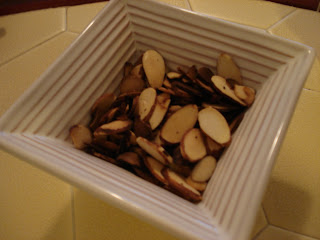 Sadly my experiment with the dates wasn't great. First I burnt them a bit. But second assuming traditional Indian technique wouldn't add bacon which is the technique that adds the flavor to dates, we didn't wrap them in bacon. Simply put bacon was missing. They were tasty but too sweet, the smoky bacon would of added the needed balance of flavor as well as added a bit of moisture. We'll call it a nice experiment. 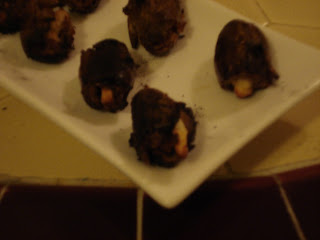 Now the cauliflower on the other hand was a superb experiment with these aromatic flavors. 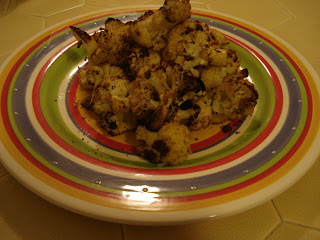 Our midweek snow bound Indian inspired dinner was a hit overall.G felt the biryani could of used a bit more broth but I disagreed, this isn't risotto the texture was a bit dry but not the chicken and the flavors were divine. And the toasted almonds are a step to not leave out, that crunch and flavor really added something. Just for color impact I might add some fresh baby peas next time. 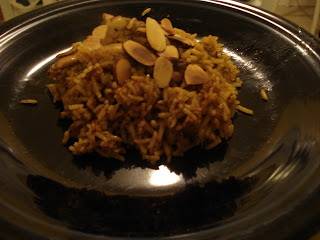