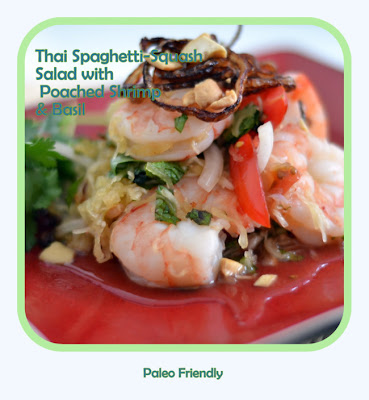 As we've shared previously we have adopted an approximately 80% Paleo lifestyle. It's taken a month or so to really figure out recipes that are still blogworthy with this new eating approach but we are both feeling more comfortable and confident in finding and creating our Paleo version recipes the past few weeks. 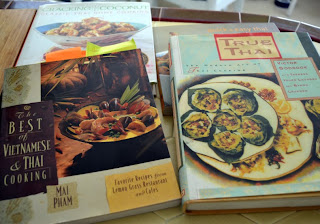 This is recipe from one of our longtime favorite Thai cookbooks; The Best of Vietnamese & Thai Cooking by Mia Pham. We have this cookbook and other Thai cookbooks flagged with several of our favorite recipes but this particular recipe for Spaghetti-Squash Salad with Poached Shrimp and Basil was a new one to us and one that I guarantee we'll be making again soon it was so good. 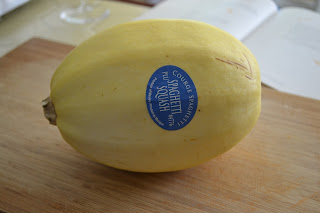 I finally found some Paleo friendly pasta=spaghetti-squash recently and was looking for a creative way to use them and this recipe was just what we were looking for. 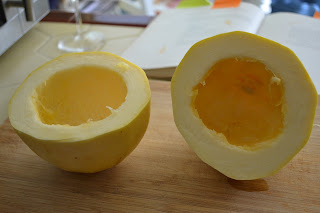 I started by cutting the squash in half and removing both the seeds and the ribs and then boiling it for about 5 minutes. After it's boiled you submerge it in ice water to cool it off. Don't skip this step before starting to scrape the spaghetti like strings from the flesh or it's too hot to work with. 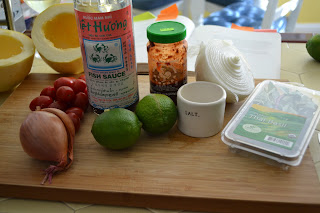 Next we made the Thai flavored sauce that include a few of our favorite Thai tastes: fish sauce, chili paste, mint and Thai basil. 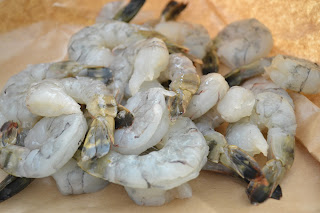 Next we poached the shrimp. I found these beautiful Black Tiger Prawns at Metropolitan Market. We typically either grill or saute' shrimp so this is a new technique to us. We actually used our steamer pot to poach them. And wow they were so tender, sweet and perfectly cooked. This might a technique we use more regularly after this. 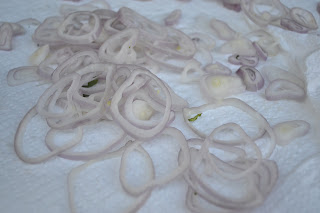 The final step was to fry the shallots. 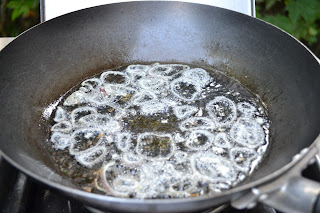 I used the grill side burner to save our house 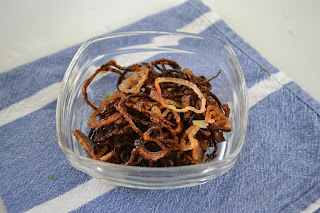 from that dreaded frying aroma that I truly can't stand. 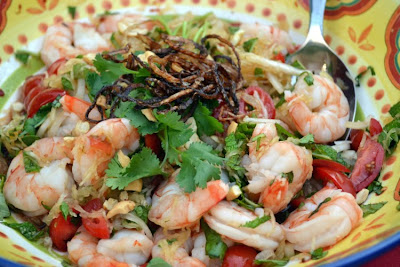 It was time to put the salad together. We tossed the shrimp with the sauce, garnished with cilantro and chopped cashews. The recipe calls for peanuts but peanuts are not Paleo friendly so we went with cashews which gave it the same crunch and salty addition. 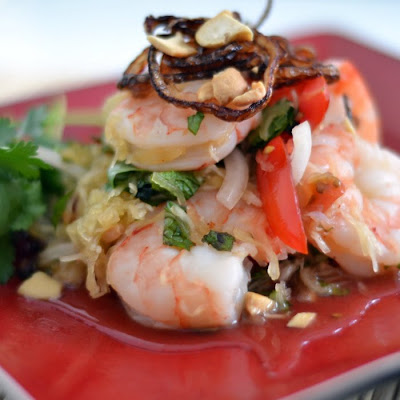 This dish was perfect.It conquered our craving for some of our missed Thai dishes that aren't so Paleo friendly. 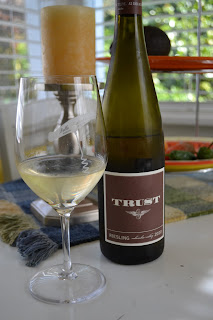 We served it with a bottle of Trust Riesling that we had picked up on Woodinville wine weekend. Riesling is always a good pairing with Thai flavors as the sweetness of the wine balances the complexity of flavors and spice well. 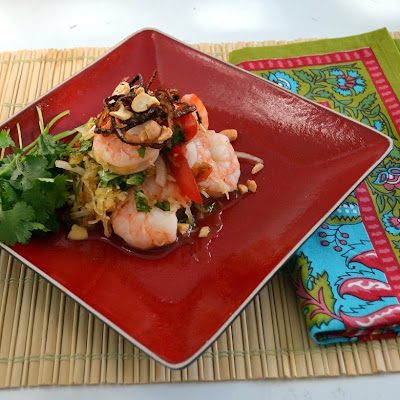 It also made great leftovers to take the next day for lunch which makes it a doubly great dish in our mind.

Bring large pot of water to boil. Place spaghetti squash cut in half, seeded & deribbed into the boiling water for 3-5 minutes. Remove from pot submerge in ice bath until cool enough to handle. When cool use a fork to gently scrape flesh working from one side to the other. Soak strands in cold water for 15 minutes to "crisp"them. Drain & dry in a salad spinner.