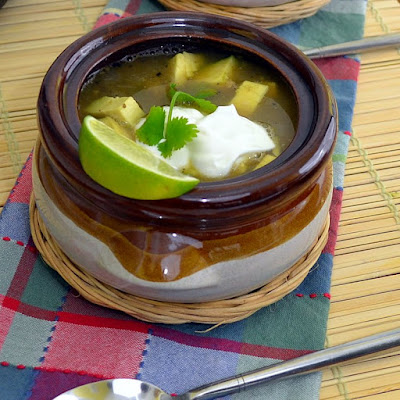 These days finding comfort is on our minds and in our hearts. And no surprise to most finding comfort foods fits right in there in our quest.
Several years ago we were introduced to this recipe for Chicken Posole by Cooking Light made with tomatillos and hominy....its a good one and definitely one of our most favorite go to soups.

Of course as with most original recipes we make again and again we tweak them over time and make them ours.

For this one we opt to roast the tomatillos under the broiler as opposed to boiling them to get that fire roasted flavor in the soup. Tomatillos are surrounded by a husk that leaves a sticky residue on the tomatillo. Even after rinsed they feel slightly sticky.

This time around I had actually made some homemade chicken stock from the carcase of the rotisserie chicken that I bought to use for the shredded chicken.

Into the stock we add garlic, onions & jalapeno.

The tomatillos are pureed in the food processor and then added to the stock with the shredded chicken and hominy.

We typically serve it with chopped avocado and a dollop of Mexican crema, a squeeze of fresh lime and a bit of chopped cilantro. 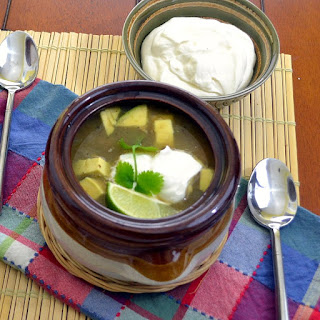 Good, good stuff!
A side note: for the record we did a post of this soup almost a year ago but it didn't include the recipe and although my photos are still far from professional these ones are significantly improved. You can follow this link to compare. (As frustrated as I get with myself at not getting Foodgawker & Tastespotting worthy photos very often at least they've improved some.)
Recipe  Link for Chicken Posole from Cooking Light