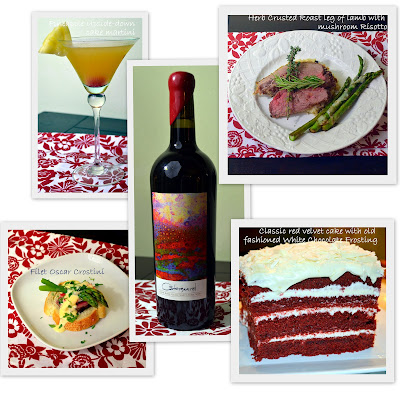 Awhile before our current reality of cancer, hospitals and transfusions G & I had planned a Valentines' Day cook off with my sister and her fiance' Mike. We had decided that we'd cook boys against girls. Girls to prepare an appetizer and dessert, boys took on the main course. Our niece and nephews joined in on the fun since they were with us on this evening too.
Since we had planned to hold this cook off on the Saturday before Valentine's day and the only thing at that point we could do to provide relief for my father was keep him warm and nourished we decided to go ahead with the festivities after all. 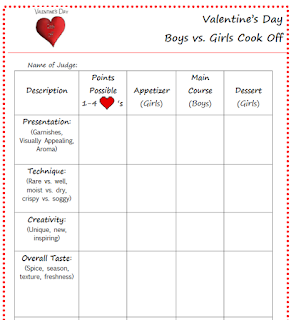 We created some criteria for judging knowing that we'd all be judging our own food we needed some attempt to keep it fair. More about this later :).
Tracy & I had scoured tons of options for our cook off recipes... we came up with a few we were really excited about making. We first decided to make a special "kick-off the fun" cocktail. We found this Pineapple Upside-Down Cake Martini on a post from Daydreamer Desserts.

Made with Cake Vodka and Caramel Vodka it was tasty but incredibly sweet. One was plenty. 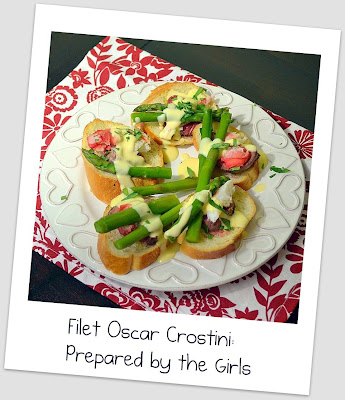 Next up for us was the Filet Oscar Crostini, recipe found on the The Foodie Bride's 2011 post. Crostini topped with perfectly seared beef filet, king crab, 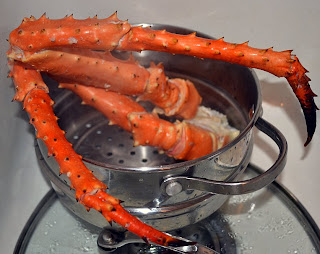 blanched asparagus and Bearnaise sauce.
So, so, so GOOD!

Let me tell you the boys had a secret huddle meeting after they saw this first course presented... they clearly knew that they were truly up for a battle and they couldn't hide that they both looked a little worried that they could beat their competition. 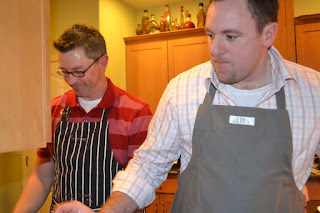 Spencer & Hunter got in on the fun too making a bacon & ranch flavored pull apart bread recipe. 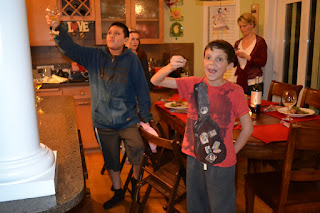 It was pretty impressive, 100% made on their own. We were all fairly impressed with their effort. 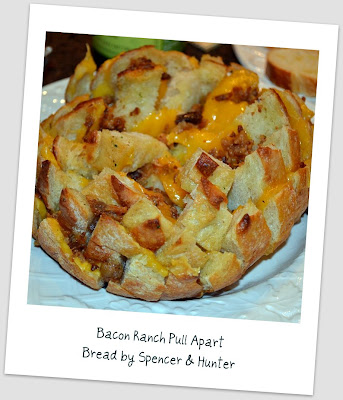 Ally also got involved making a recipe of Lasagna Cupcakes. 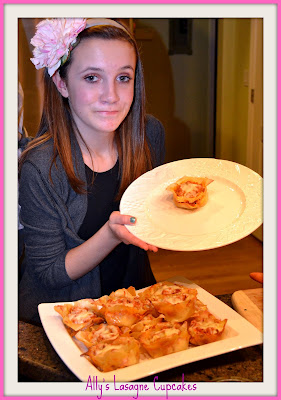 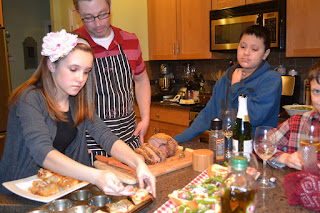 She took suggestions for best plating options and got into  it as much as a 13 year old can, another good effort. 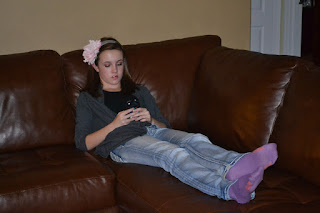 Next up.. it was time for the guys to present their dish. They tried ever so hard to keep what they were making hush, hush..but one of the under 13 crowd let it slip early on in the evening. Their team work was evident. 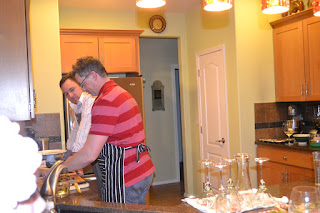 They prepared a Herb Roasted Leg of Lamb, served with Mushroom Risotto and Asparagus with Balsamic Glaze and Parmesan. 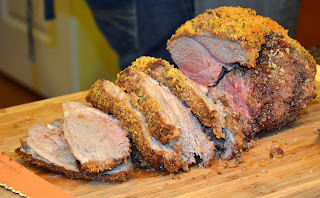 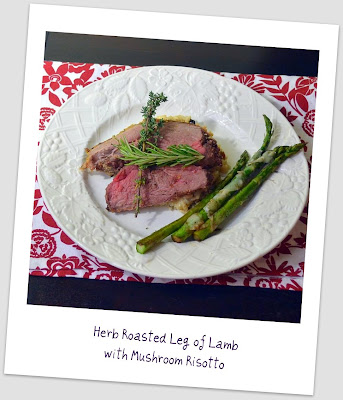 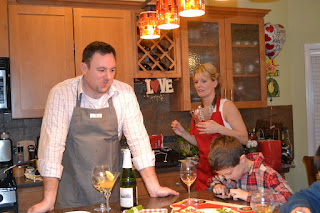 Finally, it was time for dessert. 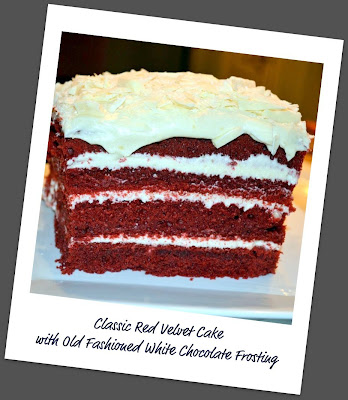 Tracy & I had spent most of the day preparing a layered Classic Red Velvet Cake with Old Fashioned White Chocolate Frosting recipe found in the December 2011 Cuisine at Home issue.
Neither of us had made such a cake endeavor before. My baking phobia and disinterest continues. But for a special occasion and a personal challenge I was up for it.

We started off pretty confident. Except for the obvious mess involved in baking I was liking the initial experience.

We successfully cooled and sliced our layers, one of the steps we were both worried about pulling off.

Tracy took on making the traditional frosting. We both thought the frosting was quite odd ...made with flour. Although we were both inclined to go for a cream cheese frosting we stuck with the traditional route. Although when the above photo was what became of the first step we continued to be skeptical. 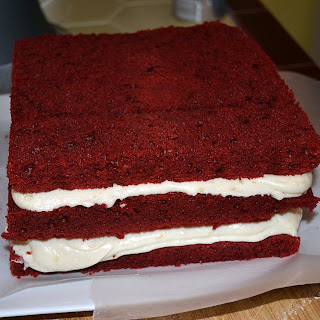 But we did create a fluffy but not overly tasty final frosting product. 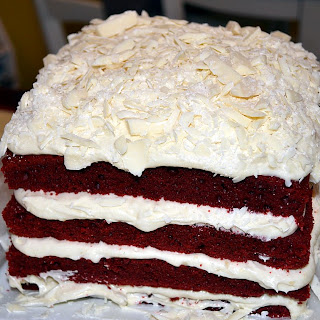 We were pretty happy with our final result, topped with shaved white chocolate. But sadly we sabotaged ourselves a bit by making it at my house and transporting it to Tracy's house where we held the cook off dinner. Driving a 4 layer cake 23 miles on I-5 was not smart on our part. Of course,even though we attempted to give it some stability with skewers..it slid and almost became a total disaster. 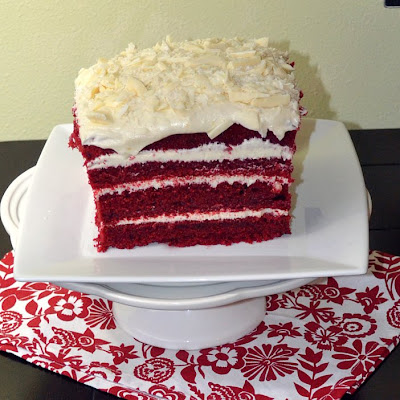 When we arrived at Tracy's house we quickly tried to stack it back together and get it into the freezer. Before serving we cut off the edges a bit which helped hide the fact that it all slid apart and for the most part presented pretty well. 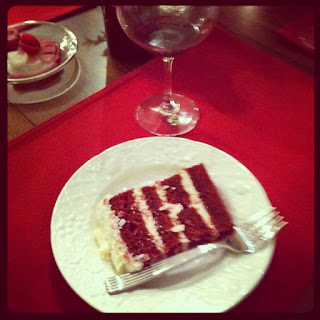 The cake was moist and delicious. The frosting was definitely not a hit with any of us. I'm determined to make it again with cream cheese frosting which I know we would all love. 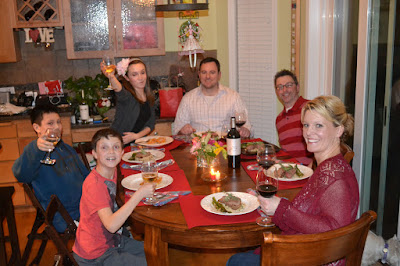 Regardless of winners and losers we all had a great time at dinner which is clearly what it was really all about. 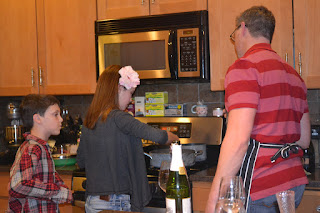 We enjoyed a wonderful bottle of our favorite Spanish wine a 2007 Clio and with the cake we served a bottle of Goose Ridge's 2007 Ostergaard Red Blend, actually a gift we had given Tracy a few Valentine's years back. 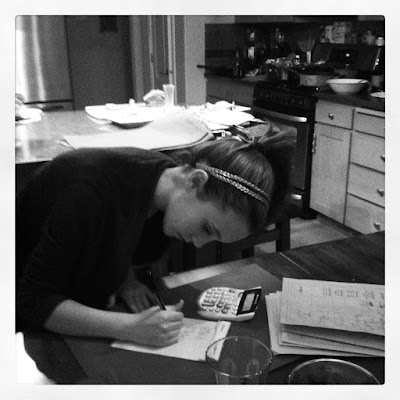 But at the end of our meal it was time to tally the results. Ally was in charge of tabulating the final scores. A great real life experience to apply her middle school math skills.
Depending on how we averaged them the results varied but for the most part Tracy & I's Filet Oscar Crostini was the winner any way we looked at it. And Spencer's unphotographed Chocolate Covered Strawberries won a close second. 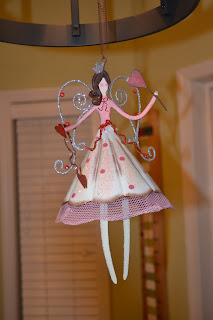 Some critical feedback freely given to each other included: Our Bearnaise sauce on the Filet Oscar was under seasoned. #1 reason Top Chef contestants go home. 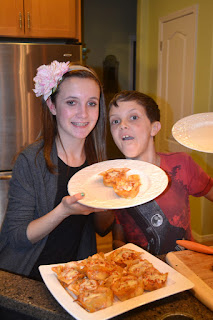 G & Mike's lamb was slightly too medium and lacked some seasoning as well.
The boy's pull apart bread needed the seasoning spread more evenly throughout the bread. And Spencer's chocolate covered strawberries were a hit all the way around but needed a better coverage of chocolate (not photographed.) 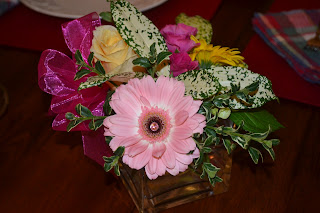 We are thinking this might be a new family Valentine's tradition that we've started as a way to share our love for each other, food and cooking in general. 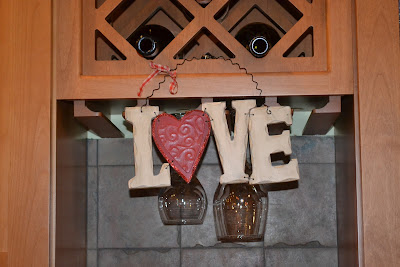 We wish you some great food with the one/s you love this Valentine's Day! 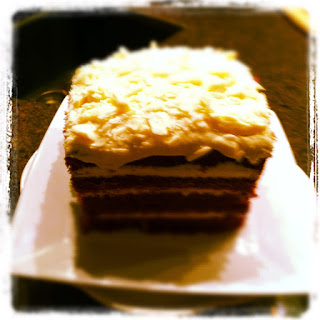