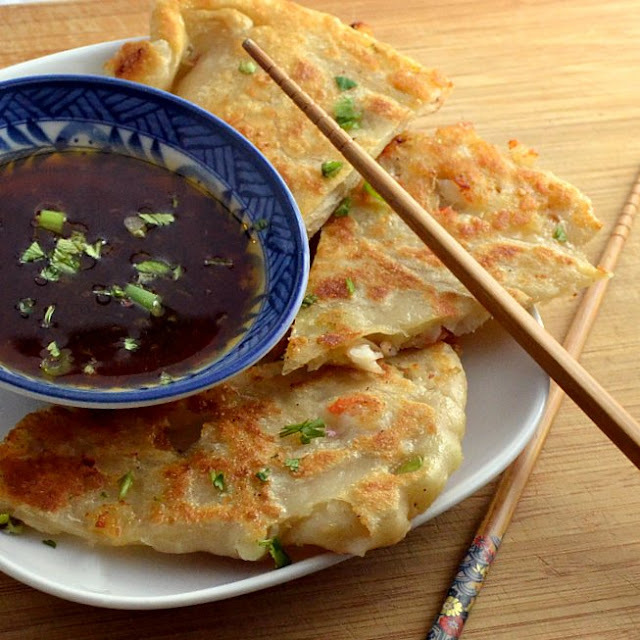 Usually during our Christmas break we are very busy creating some moderately fabulous meals for ourselves and others. But this year our break seems so short and busy most of our meals have honestly been more of the, "Hey how about some cheese, salami and crackers again tonight?" variety.

But a few nights we did happen to pull it together enough to make some tasty meals. We happened to have some shrimp we didn't completely use left from our wonderful Seafood Chowder that G had made for Christmas eve that I wanted to put to use. I came across this recipe for Shrimp-Scallion Pancakes in the December Rachel Ray magazine that sounded tasty and  next thing we knew we were immersed in putting together these very tasty pancakes.

There are only a few ingredients but the dough and rolling process was a bit more difficult than Rachel Ray made it sound. Our suggestion would be to chop the shrimp in much smaller pieces than we ended up doing. We were wanting to not lose the shrimp flavor and texture but it definitely made rolling out the pancakes flat (like in the photo in the magazine) very difficult, actually impossible. But no matter they were still delish.

Served with the dipping sauce they were close to fabulous. Could be the perfect New Year's Eve appetizer if you're looking for one. 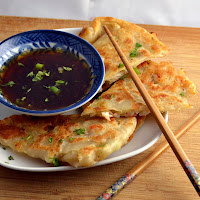 In a small saucepan, boil 1 cup water. In a large bowl, combine the flour and salt. Stirring, slowly pour in 3/4 cup of the boiling water until just incorporated. Knead briefly until a dough forms, adding more water in very small increments if needed. Transfer to a floured work surface and knead for 1 minute more. Return to the bowl; cover with a damp cloth.
Divide the dough into 4 pieces and shape each into a square. On a floured surface, roll 1 dough square into a 7-by-10-inch rectangle. Brush the top with 1 1/2 tsp. sesame oil; fold in half. Brush with 1 1/2 tsp. more sesame oil; fold in half again. Repeat with the remaining dough squares.
Roll each dough piece into an 8-by-11-inch rectangle. Distribute the scallions and shrimp lengthwise over half of each rectangle. Fold the other half over the filling; fold in half again. Roll into 9-inch pancakes.
In a skillet, heat 3 tbsp. vegetable oil over medium-high heat. Fry the pancakes 1 at a time, turning once, until golden, 5 minutes. Add more vegetable oil to the skillet as needed. Transfer the pancakes to paper towels to drain. Cut each one into 8 wedges.
Posted by Unknown at 8:29 PM