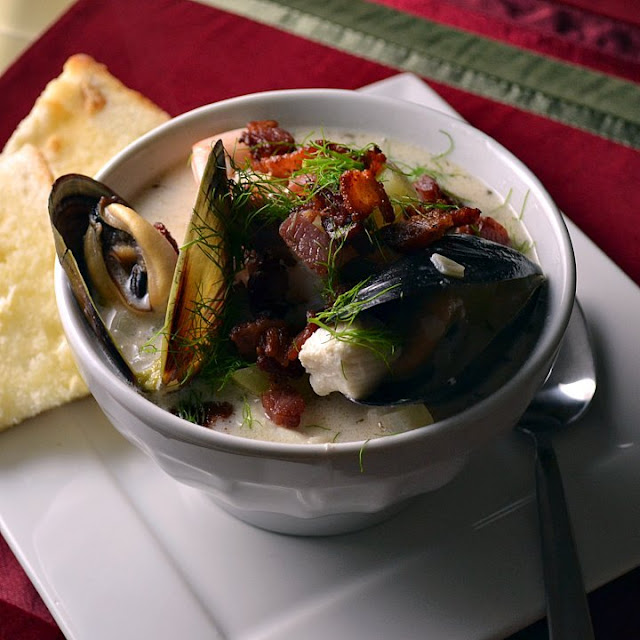 We both are pretty big fans of a good, hearty, potato packed chowder. And this special Seafood Chowder that we made for our quiet Christmas eve dinner was actually pretty spectacular if we do say so ourselves.

And even better it was fairly simple to make. We had spent the day skiing and G came home and put it all together pretty quickly.

We used some mussels, halibut and large shrimp.

We served it with some very garlicky crusty bread. It was the perfect meal served with an Oregon Pinot Blanc made by Erath Vineyards. 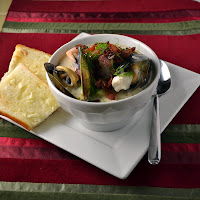 
Cook bacon in a large pot over medium heat until crisp; transfer to a paper-towel-lined plate. Pour off all but 1 Tbsp. drippings. Add onion, fennel, and butter. Sweat vegetables over medium heat until translucent, about 5 minutes. Stir in flour and cook 1 minute. Add wine and boil 1 minute more.
Add clam juice and potatoes, scraping up any browned bits. Bring liquid to a boil, reduce heat, and simmer mixture until potatoes are tender, 8–10 minutes.
Stir in shrimp, fish, and mussels. Cover pot; simmer chowder until fish and shrimp are cooked through and mussels open, about 5 minutes. Discard any unopened mussels.
Add cream and thyme to chowder. Simmer chowder 2–3 minutes to heat through. Season chowder with salt and Tabasco; garnish with bacon and fennel fronds.