Motivated by a recent episode from The Cooking Channel's new Easy Chinese:San Francisco we decided to head up to Seattle last Sunday for some Dim Sum. 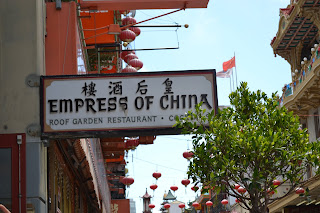 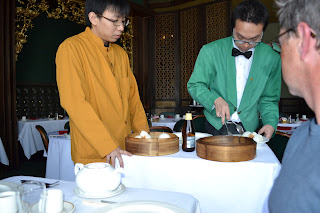 Our last dim sum experience was in San Francisco at the Empress of China in August.
So we checked out Yelp and found Harbor City was the #2 pick for Dim Sum in Seattle. The #1 pick Jade Garden was directly across the street but we just happened to be on this side of the street and went with Harbor City.

It was around 2:30-3:00 when we arrived so we immediately got a seat. And pretty much immediately after the dim sum cart lady came over to offer up some choices. We weren't fully familiar with most of the choices and just kind of randomly took what she offered. Although when we she brought up the chicken feet we definitely declined that offer.

We decided to just go with it. We ended up with some fried shrimp won ton with a walnut honey sauce, two different pork filled dumplings,

some sticky sweet rice and this sticky scallion type roll. It was fine, not outstanding. We experienced the stereotypical overstuffed feeling after about eating 1/4 of what we ordered. Pretty sure that will be our one & only trip to Harbor City. But glad we gave it a try.
While down in Chinatown we decided to walk over to Uwajimaya, the large Asian grocery, to see if there was anything that caught our eye. We love their seafood and produce departments such interesting choices. We found some things we'll be coming back for when we host our December Supper Club that we've decided to do a homemade sushi theme.

G also came across some spicy pepper beef at the meat counter that he wanted to give a try. After some hesitation on my part (have always heard spiced or breaded meat for sale at the markets are usually meats on the verge of expiring freshness) G ordered a pound. I came across some great looking baby bok choy to add to it for a stir fry.

We had some fresh chantrelles and shitakes to make a stir fry with the beef the next night. We threw some Jasmine rice in the rice cooker and our stir fry came together pretty quickly with the pre-seasoned meat.

We opened a bottle of Oregon Argyle Chardonnay. Steamed a few Trader Joe's chicken potstickers and

And dinner was served.