The theme for our most recent supper club menu was Caribbean. I love when our themes challenge us to make things we've never made before.
In Mexico many of the ceviche' dishes we've tried are served with deep fried plantain chips. We've always wanted to make them but never really had reason before now. We searched for Caribbean appetizers recipes because that was our assignment this month and found a recipe for Plantain Chips with Warm Cilantro Dipping Sauce on the epicurious site.
We also found a recipe that sounded worthy of trying for Crab & Chorizo Fritters on epicurious as well.
We started first with the fritters:

Frying the chorizo ( We used fresh ground chorizo as that how we like it & Metropolitan Market makes the best. The recipe calls for chopped dry cured link chorizo which I tend to think of as mystery meat.)
While G tended to the chorizo I started the sofrito. I gathered my ingredients,

and sauteed them until they were rendered down and ready.

I added cumin, ancho chili powder and cayenne to my sofrito mix.
The next step was to create the fritter batter in a saucepan,

After the batter is formed you remove it from the heat to add the eggs, crab, sofrito and chorizo.

Once the mixture is all together you form the fritters and fry them.

G was in charge of frying duty on the stove. 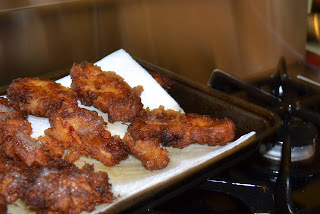 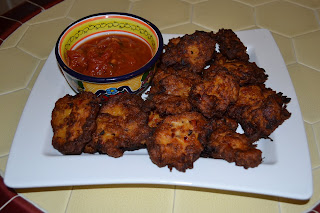 While G was finishing the fritters I was working on the plantains.

Well the story is we didn't buy green enough plantains which would have been helpful. If you are not familiar with plantains don't be fooled they look like a banana on the outside but that's the only similarity. You actually can't eat them raw.

Ours were just a tad too ripe to slice thin enough on the mandolin, I actually gave up and just used a thin sharp knife to slice them. 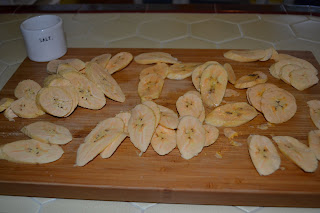 But I couldn't get them quite thin enough.
This recipe also gave me the perfect excuse to finally buy a little fryer. I hate to fry as it is so messy. I think for as little of it as we really do this might be helpful for the mess and smell. 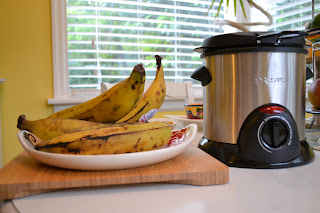 Our chips turned out good but if they were a bit thinner they would of been crispier which is what I was hoping for. 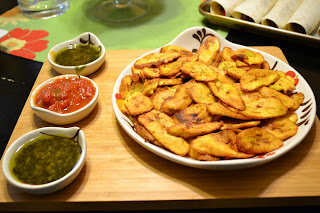 These were both fun Caribbean appetizers to bring to our gathering. They must of been pretty good because the plates were empty before dinner was served.
Recipes both found on the epicurious site:
Crab & Chorizo Fritters
Bring 1 cup water, butter, and salt to boil in heavy medium saucepan, stirring until butter melts and salt dissolves. Add flour and cumin. Stir vigorously 3 minutes. Remove from heat. Mix in eggs 1 at a time, blending well after each addition. Stir in chopped chorizo and sofrito. Gently stir in crabmeat.
Pour enough oil into heavy large saucepan to reach depth of 3 inches. Heat over medium heat to 375°F. Working in batches, spoon dough carefully into oil by tablespoonfuls, flattening slightly with back of metal spatula. Fry fritters until cooked through and brown on both sides, turning once, and adding more oil as needed, about 5 minutes total.
Transfer fritters to paper towels to drain; serve.
*A Caribbean cooking base usually made of tomato paste, onions, peppers, and spices
Read More http://www.epicurious.com/recipes/food/views/Crab-and-Chorizo-Fritters-234777#ixzz1Pxi08vmo
Plantain Chips With Warm Cilantro Dipping Sauce
﻿
Trim off ends of plantains and cut 4 vertical slits in skin of each (do not cut into fruit). Microwave for 1 minute at 50 percent power, then pull off peel. Cut diagonally into thin (scant 1/8-inch) slices.
Pour both oils into 3- to 4-inch-deep medium saucepan. Attach deep-fry thermometer to side of pan and heat oil to 350°F over medium heat. Working in batches, carefully add several plantain slices to hot oil. Cook until golden brown, turning occasionally, about 4 minutes. Using slotted spoon, transfer chips to paper towels to drain. Sprinkle with salt and pepper; cool slightly.
Serve with Warm Cilantro Dipping Sauce.
Blend first 4 ingredients in food processor until cilantro is finely chopped, about 15 seconds. Transfer mixture to medium heatproof bowl.
Heat oil in medium skillet over medium heat until hot; slowly whisk into cilantro mixture. Mix in hot sauce. Season sauce to taste with salt and pepper; transfer to small bowl. Serve with plantain chips. (Dip can be made 2 hours ahead. Let stand at room temperature.)