May Supper Club was "Stuffed"

G & I were the hosts of our May Supper Club this past weekend. We have always enjoyed hosting supper club. For one thing it gives the required motivation to thoroughly clean our house we often need this motivation to do deep cleaning. And second I love to set a table for dinner.

But really the thing we love the most when we host supper club is challenging ourselves with finding a "just the right theme." For some reason this go round nothing was jumping out at us until last weekend when were lounging around watching an episode of "Guys Big Bite" of which the theme was "Stuffed." The recipe for stuffed mussels was what really got us excited. As the host though we knew we'd have to find a different main course than the mussels but we liked the idea. So we sent out theme to the other couples; every dish is to be "stuffed" in some manner. Everybody stepped up to the stuffed challenge brilliantly.

Our main course was a recipe found on Foodnetwork by Emeril for Crabmeat-Stuffed Flounder Roulades with Green Bean Almandine(recipe linked). Some adaptations were made to this one. We used Dover Sole in place of flounder. And I decided to do a stuffing with a combination of crab and shrimp meat.

The first step was to make Emeril's famous "Essence" seasoning mixture. You know the one, the one that gives his recipes that "BAM" effect. 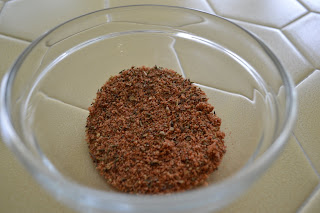 So we put together the seasonings and flavored the combo of shrimp & crab with the "essence' before wrapping it and putting in the fridge until we were ready for it.

Next I minced a lovely colorful combination of peppers and mixed them with celery and onion.

The veggie combo is cooked with some butter and then cooled and added with mayo, beaten egg, Worcestershire, hot sauce and lemon juice until you get this amazingly yummy seafood stuffing.

Next we sprinkled the sole with the essence and put a good portion of stuffing on each piece of fish before wrapping the sole around it.

Now we were ready to put our dish in the fridge until our guests arrive and we are finished with appetizers and ready to cook the stuffed sole.
Couples arrived in waves as usual. Everyone with their stuffed course in hand. And we were in for a treat with each dish. (for future suppper club gatherings I should probably write down the actual name eveyone's recipes but for now it's just based on memory so if I don't get it just right I apologize to our fellow supper clubians.)
First was Robin's Goat Cheese stuffed Dates with Pancetta

Next was Chris & Jeff's Stuffed Mushrooms 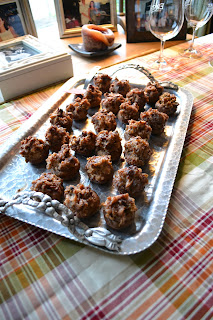 I had some extra seafood stuffing so I jazzed it up with a bit of additional cream cheese and stuffed a few small peppers for an added appetizer.

This group loves appetizers in general and they were all devoured pretty quickly this time as usual.
It was on to dinner with a quick welcoming toast at the table 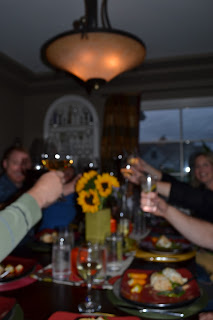 before serving the Crab & Shrimp Stuffed Sole on top of Green Bean Almandine (thanks to Lisa for reminding me at the last minute to add the parsley garnish to the top. That's a usual memory lapse I'm famous for at the end.) 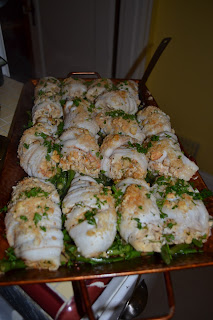 We served the sole with Lisa & Derek's side dish of Ricotta & Pancetta stuffed peppers.

It really was so wonderful everyone enjoyed the stuffed food and in turn we stuffed ourselves well as usual. 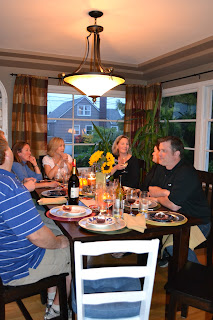 After some coffee was pressed it was on to Jenni & Arnie's dessert: Chocolate Cupcakes stuffed with a Granache filling and topped with meringue. So good, dense and chocolaty. The perfect ending.

Really every dish was awesome. I loved the ricotta stuffed peppers there were so flavorful and the perfect mouthful was tasted in each bite.
We only have 1 more Supper Club gathering before we take our Summer hiatus through September. But we do always enjoy our gatherings and we are proud to have been part of this long running tradition that we've all created together.
Posted by Unknown at 7:09 AM