Well was really hoping the whole need for comfort food would have passed by now...but this is Tacoma today...April 5th, 2011 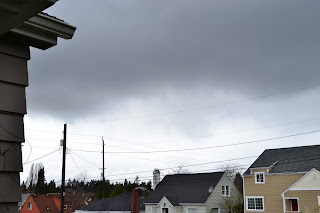 and add to this it's like only 43 degrees or something ridiculously cold today. What a bummer spring is starting out to be in the Northwest.
But with that bummer came an inspiration to go ahead and make the Gutsy Cooks Club Assignment from last week that we didn't get to being in sunny, WARM Cabo and all. But everyone of the Gutsy Cooks versions of this dish of; Spanish Lentils looked so yummy that their posts and today's weather pushed me to give it a try. 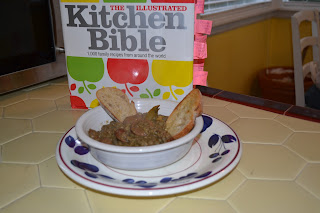 Pretty simple dish for a Tuesday night really. My only real supermarket visit since returning from vacation this weekend has still only been Trader Joe's so I made some adaptations based on what was available from there. Some changes I made to the original recipe included: I subbed smoked chicken andouille sausage for the chorizo (Trader Joes only had a tofo chorizo) and I used my favorite TJ's Applewood Smoked Bacon (so yummy!), We love smoked paprika in this house so we switched that out for the sweet variety and I added chicken stock as opposed to veggie stock. I think I also used "green" instead of brown lentils.
First I pulled out our best kitchen investment to date: 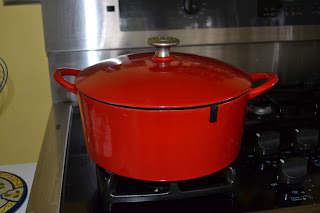 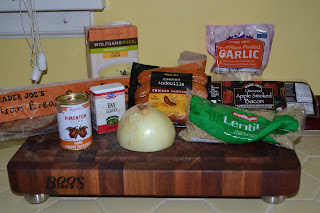 Started cooking the andouille, lentils with the bay leaf and some water: 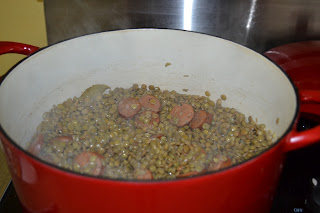 Once the lentils were cooked for about 30 minutes I removed them from the heat and went for a walk in the rain with my neighbor & friend SP. We always solve the world's problems on our walks.
Came back and cooked the lentil a bit more adding a little more water. Browned some cloves in garlic 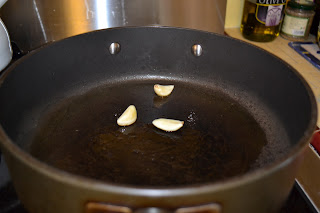 Fried the 1 slice or bread in the same pan 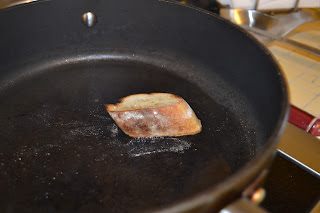 Combined the garlic and bread in the food processor and made a fine bread crumb mixture.
Started the bacon and added the onion: 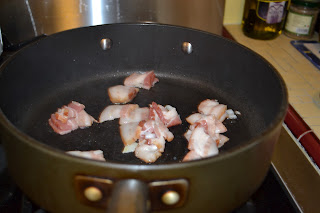 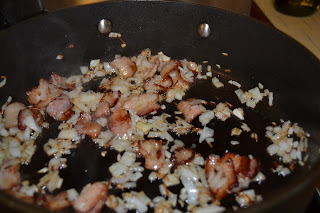 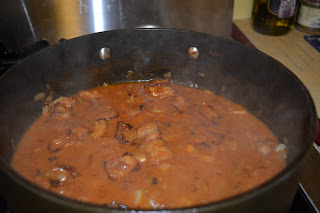 Somewhere along the way to here I made a mistake I should have turned the heat off the lentils because by this point they had started to get a bit mushy... 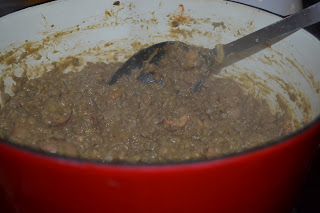 Opened a bottle of our trusty everyday, Tuesday tonight, drinking wine: Columbia Crest Two Vines, Cab... which was tasty with the meal.

So honestly because I obviously cooked the lentils too long the texture and appearance of the lentil dish was less than desired; the texture was more like refried beans maybe but the flavor from the bacon and smoked andouille and paprika were great and quite comforting.

I do encourage you to go check out the other Gutsy Cooks version of the dish because theirs are much more appetizing looking than mine .
Posted by Unknown at 5:07 AM