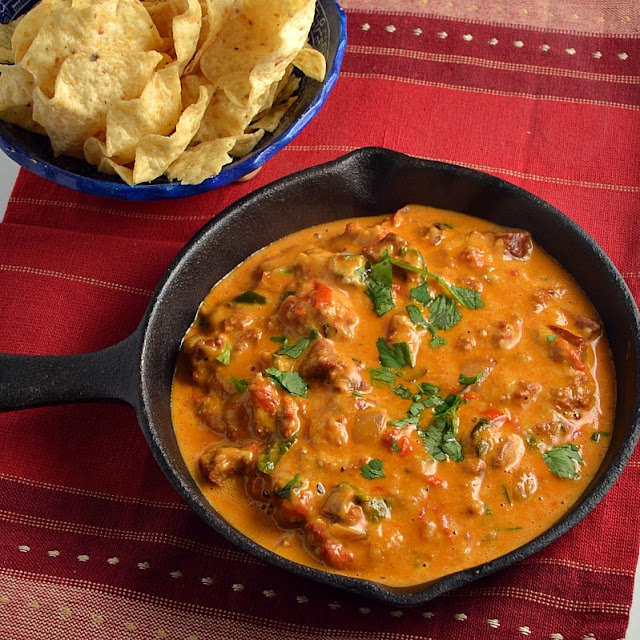 The first time we ever had the treat of trying Queso Fundido was at a festive restaurant in Portland called Oba several years ago. We were immediately in love, it was like Mexican style fondue.

For Halloween we usually order pizza or make something casual and indulgent. This year we decided making some queso fundido with chorizo would be the perfect simple meal to snack on while hanging out waiting for the trick-or-treaters to ring the doorbell. 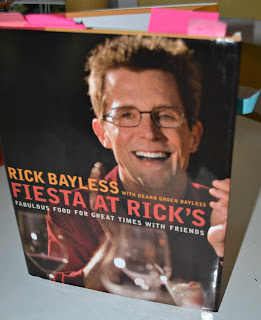 Rick Bayless' Fiesta at Rick's is the latest of his cookbooks that we've added to our collection. And as you can see from all of the stickies is definitely been put to good use already. His recipe for Tequila-Infused Queso Fundido was our base recipe that we used but we added some chorizo into the mix. 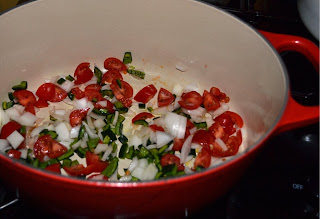 We started with our chopped veggies and some jalapeno and 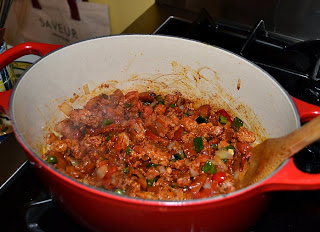 then added our tequila before adding in the chorizo and cheese. 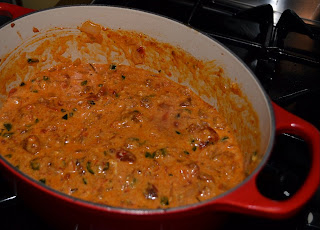 The consistency was a bit clumpy and separating which initially worried us. But it did all come together nicely in the end and it tasted super yummy. We scooped it up with both tortilla chips and some fresh warm flour tortillas. 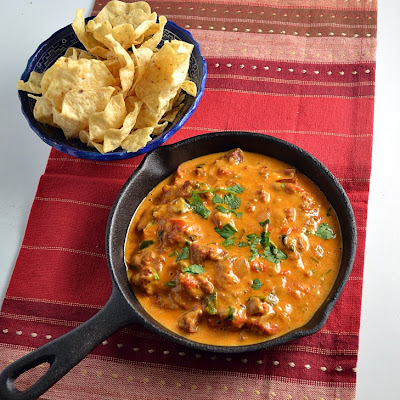 Heat the oil in a  large ) skillet over medium-high. Add the tomato, onion and jalapeño , and cook, stirring nearly constantly, until the onion begins to soften and brown, about 7 minutes. Add the tequila and cook quickly, stirring, until nearly reduced to a glaze. Add chopped chorizo.
Reduce the heat to medium-low, sprinkle the cheese evenly over the vegetables and stir slowly and constantly until just melted—too long over the heat and the cheese will become tough, oily and stringy.
Scoop into a warm dish, sprinkle with the cilantro and serve right away with tortillas for making soft tacos.  You may want a little salsa, too.
Posted by Unknown at 5:00 AM