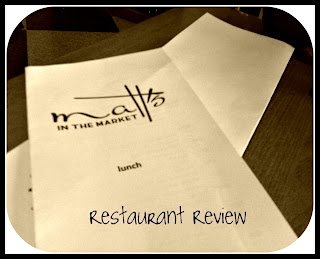 Lark has been a Seattle “Gotta Go” to Restaurant that we’ve been wanting to try for a while now. It’s known as one of Seattle’s best artisan style restaurants. So when we already had plans with some other food lovin’ friends to go up and pick up our wine club shipment we knew it would be a good excuse to go try a new restaurant while we were there. 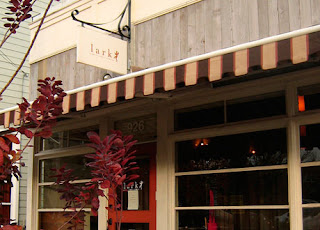 Originally we were going to give Quinn’s a try but it was a busy Friday night on Capitol Hill so that wasn’t going to happen and Lark just happened to have a table for 4 when we arrived. It was meant to be. 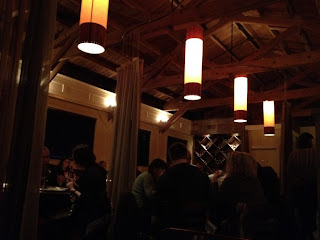 We walked into Lark’s warm and homey restaurant and were immediately glad to be there.   Their focus is on small plates (one of my fav eating styles) featuring local ingredients. The menu is pretty impressive it was difficult to weed out what we did  and didn’t want.

We finally narrowed it down. Our server suggested 5-6 plates for the four of us. 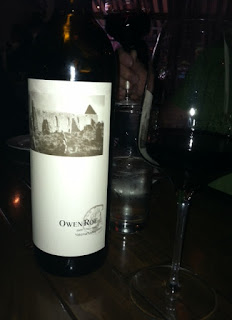 Being 4 Northwest wine fans we ordered a bottle of 2009  Yakima Valley Owen Roe. It was a good choice for our meal. 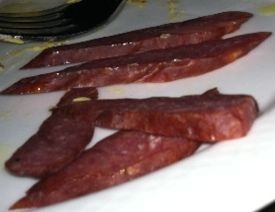 We started off with the Landjager served with 2 different mustards. G somehow knew Landjager was a salami like meat. It was also a good choice. Almost like a pepperoni in texture. And the horseradish infused mustard gave it just enough kick for my liking. 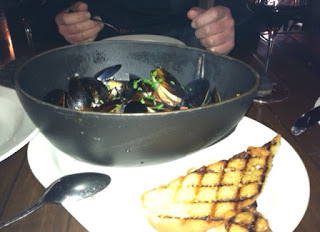 Next we had my personal favorite dish of the night; Penn Cove mussels with chorizo and a velvety piquillo pepper broth served with  a crisp and crunchy garlic crouton. I could of swam in this broth if it was an option. The mussels were perfectly cooked and supple. 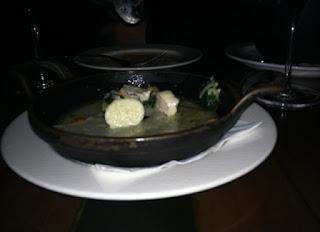 Then came the surprise of the meal, Ricotta gnudi with nettles, garlic and pine nuts. No one in our party was really clear what exactly gnudi was but we were predicting it would be similar to gnocci. And OMG..I’m telling you it was this tender, delicately flavored goodness that was beyond expectation. Sooo….Good! 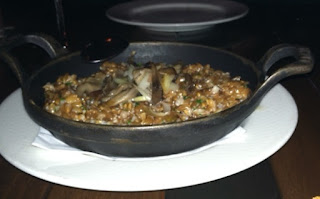 Up next we had the Grain Farro with ramps, oyster mushrooms and mascarpone. This was good but not in our top favorites of the meal. It was buttery to the point that all we really tasted was butter. Maybe if the other dishes weren’t so over the top fantastic this would have been more likable but when you are eating dishes like the others it was hard to compete. 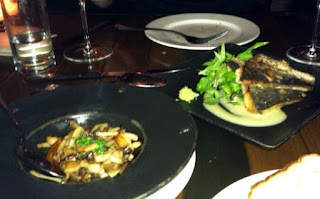 We chose the Spanish mackerel with fresh wasabi as our next pick. Having not eaten mackerel before it was the wasabi and dashi mayo that really attracted me to the dish. The mackerel was dense and tender and the sauce was again perfectly delicate. 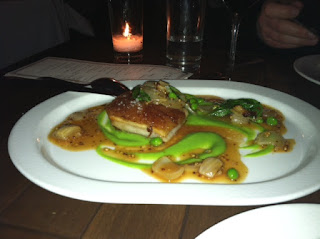 Our next dish was G’s pick and overall favorite; Pork belly with Peas. And I have to say in the past pork belly hasn’t really been my thing but this was pretty amazingly good. Tender and flavorful, a melt in your mouth dish. 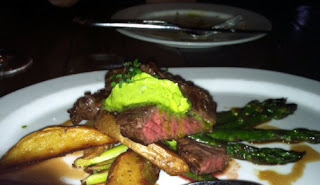 Our final main dish of the night was the Wagyu hanger steak with asparagus, crispy potatoes and ramp butter. This steak was definitely another melt in your mouth experience with each bite.

As a table we did partake in a few delicious desserts; The date hazelnut brown butter cake was a definite stand out Jim’s favorite of the night and G was in heaven with his Theo dark chocolate pave. (Sadly I was so full by this point in the meal I couldn’t even get photos of our desserts.)

Lark was an amazing restaurant experience. I know this is a restaurant that we will be visiting over and over again now that we finally made it there.
Posted by Unknown at 10:56 AM

Email ThisBlogThis!Share to TwitterShare to FacebookShare to Pinterest
Labels: restaurant