Several years ago we found this recipe by Ina Garten on the FoodNetwork site for Steakhouse Steaks that has been one of our "go to" recipes when we are craving a steak.
Although we were both pretty skeptical that "Snowstorm 2012" was going to hit this weekend it actually did. 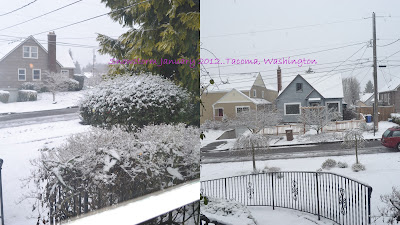 And snow just made me crave a steak for whatever reason. It's rare that I crave beef, it's usually G who gets those types of cravings...but after all these years his beef loving side has definitely rubbed off on me.
This recipe really refined our know how in creating a steak that is actually better made at home than at a fancy steakhouse.
First we started off with two nice tenderloin filets, better known as "filet mignon."

Ina starts first by recommending rubbing the steak generously with both cracked black pepper and fleur de sel. In the past we've just used Trader Joe's Sea Salt for the fleur de sel but this time I broke the bank and invested in the real thing.

Another tip I've learned recently in making the perfect steak is too keep your steak cold until you cook it, don't let it come to room temperature. A mistake we've made many a time.
While I seasoned the steaks the cast iron skillet was in the oven warming. The steaks are first seared in the cast iron skillet on the stove top...searing each side of the steak for color. Then the steaks are topped with a slice of butter and go into the 400 degree oven until they reach an internal temperature of 120 degrees for rare. It's essential to let the steaks set a good 10 minutes before you cut into them. Don't skip this step or you'll regret it and it won't be at all like a "steakhouse" steak.
In addition I decided to make a side dish I'd always wanted to make, crusty potato galettes. Recipe found on epicurious.

This was the best potato dish I've made in a long time. First the potatoes are sliced thin. I couldn't get the mandolin open so I used the slicing attachment on our Cuisineart food processor. Then I mixed them  with 1 Tablespoon melted butter, 1 Tablespoon olive oil and some salt, pepper and spicy Mrs. Dash.  You carefully arrange the first layer of potatoes in a cast iron skillet, I used two individual skillets for ours.

You cook them on the stove top until they start to sizzle then move them to the oven. When they come out of the oven you flip them over. My family is known for loving crispy fried potatoes and this was best because the whole galette was crispy. No fighting with dad for the crispy pieces.

The potatoes were crispy, tender on the inside...just yummy all the way around.

The last part of the meal is another delicious favorite of mine the Roquefort Chive Sauce. You have to go the extra step and make this sauce with the steak. It truly is divine.

We served our steakhouse meal with a 2010 Cline red blend called Cashmere. Made with some of my favorite grapes; Mourvedre, Granache and Syrah. 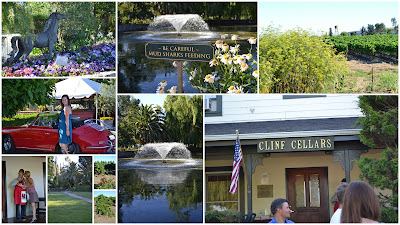 Cline was one of the wineries we visited in Sonoma this summer. But sadly we arrived just as it was closing so we only got to do a self tour of the winery. But it was beautiful.
If you've got a hankering for a steakhouse steak, or if you've been wanting to learn some tips about how to make your steak at home taste better than the restaurant I highly recommend giving this recipe and technique a try.
Steakhouse Steaks : Recipe Link
Crusty Potato Galette: Recipe Link﻿
Posted by Unknown at 5:47 PM