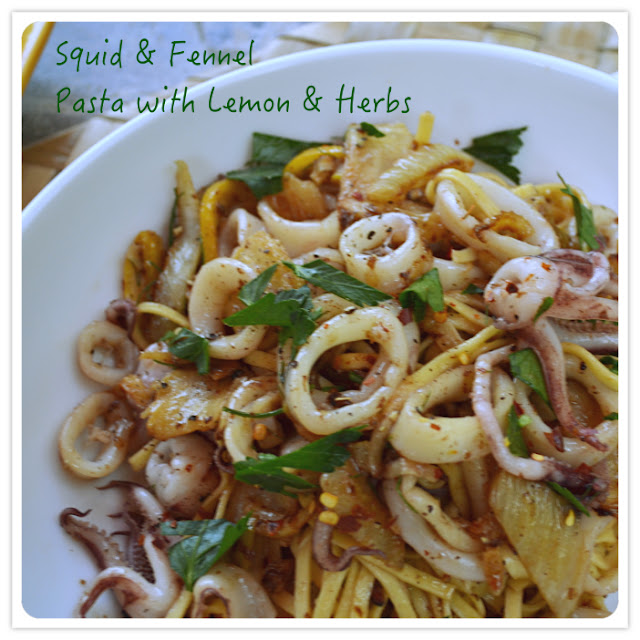 Maybe because it's been raining for like 30 days straight here or because light and fresh food are calling our names, either way this Squid and Fennel Pasta with Lemon & Herbs that we made during this last summer has become worthy of sharing and is sounding pretty delicious right about now.

We love calamari and/or squid, but mostly at a restaurant. Of course deep fried is always great at happy hour or sauteed as an appetizer before a great Italian meal but it's rare that we cook it at home. Mostly because the odor is fairly strong and it's so delicate to make well. 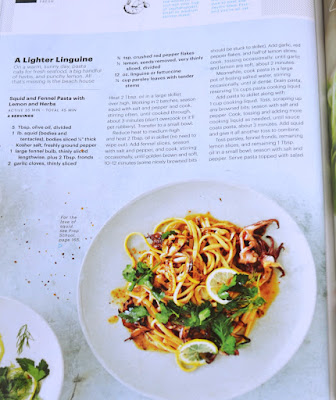 So on this late summer night we agreed we'd make this fresh squid recipe that we found in Bon Appetit magazine but that we'd make it outside on the grill.

We sauteed the fennel and veggies on the side burner but we grilled the squid on the grill separately and added it to the pasta. Squid is very delicate you have to cook it so carefully to not over cook it and keep it tender and flavorful. We've all had rubbery calamari, really is there nothing worse? Well maybe overcooked clams or any type of seafood actually.

This was a great summer pasta dish enjoyed out on the patio with a great Pacific Northwest Sauvignon Blanc. Both the lemon and herb flavors gave it a fresh and delicate flavor that a hot late summer day calls for. Looking forward to one of those warm DRY days to come soon.

Preparation
Heat 2 Tbsp. oil in a large skillet over high. Working in 2 batches, season squid with salt and pepper and cook, stirring often, until cooked through, about 3 minutes (don’t overcook or it’ll get rubbery). Transfer to a small bowl.
Reduce heat to medium-high and heat 2 Tbsp. oil in skillet (no need to wipe out). Add fennel slices, season with salt and pepper, and cook, stirring occasionally, until golden brown and soft, 10–12 minutes (some nicely browned bits should be stuck to skillet). Add garlic, red pepper flakes, and half of lemon slices; cook, tossing occasionally, until garlic and lemon are soft, about 2 minutes.
Meanwhile, cook pasta in a large pot of boiling salted water, stirring occasionally, until al dente. Drain pasta, reserving 1 ½ cups pasta cooking liquid.
Add pasta to skillet along with 1 cup cooking liquid. Toss, scraping up any browned bits; season with salt and pepper. Cook, tossing and adding more cooking liquid as needed, until sauce coats pasta, about 3 minutes. Add squid and give it all another toss to combine.
Toss parsley, fennel fronds, remaining lemon slices, and remaining 1 Tbsp. oil in a small bowl; season with salt and pepper. Serve pasta topped with salad.
Posted by Unknown at 7:58 PM