Okay, so I must give a huge shout out to Raymond from Your Just Desserts who is our host for this month over at our Gutsy Cooks Club. The recipe for Parmesan Soufflé Rolled with Greens & Leeks with Red Bell Pepper sauce from  "The Earth To The Table Cookbook: by John Ash,  he picked for us all to prepare this week is the entire reason we love being Gutsy Cooks members. It's a recipe again I would never have thought to seek out and even think to make on our own and let's face it .....it's a Souffle. I mean hey, I don't think either of us has actually ever eaten a true souffle let along made one.

Now here's the truth; we were excited and both anxious at the same time about making this recipe. Don't get us wrong we are not fearful of a recipe that has tons of ingredients by any means or even multiple steps. But a recipe that includes whipping egg whites and hot ingredients to the yolks....oh, the many, many things that could go wrong. But luckily the fear didn't overtake us and we marched on and took on the self imposed challenge.

We didn't deviate much from the given recipe as a soufflé in itself was new to us. So we considered it our challenge.

Then we moved onto the filling made with red onions, garlic, leeks, baby arugula, tarragon and basil and lots of delicious gruyere and pepper jack cheese.

G, who actually has a bit of professional restaurant experience in his distant past was in charge of the scary egg mixing steps.

And of course he handled it just like a pro.

One issue we had was that we didn't have a 10 x 15 jelly roll plan only a 9 x 12 pan that we had to make due with. Making our egg layer thicker and obviously smaller than it was supposed to be.

But it puffed up beautifully.

And quickly deflated as I read all soufflés eventually do.

It even came out of the pan smoothly without any huge tears, rips or holes. Another fear we anticipated could happen.

We added the yummy herb, greens and cheese mixture, which had a fantastic aroma. 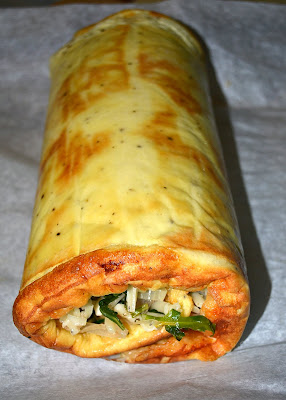 And we even pulled off rolling it up without any major disasters. At this point we were feeling pretty good about ourselves.

Now it turns out the funny thing was the most overall challenging part of this dish ended up being = figuring out how to get an attractive and appetizing photo of it. Which we cared less about after tasting it. Imagine a veggie lasagna without the pasta noodles with a delish flavorful red pepper sauce.

We actually ended up with far too much of the stuffing mixture and the red pepper sauce left over so we plan on getting creative with the leftovers this week.

Thanks Raymond for keeping us on our toes. It was a fun, new cooking adventure for us.

I encourage you to head over to Monica's Sweetbites blog and learn more about our Gutsty Cooks Club and join us on our cooking adventures.

MAKE THE FILLING
In a large sauté pan, heat the olive oil and sauté the onions until lightly browned and caramelized. Add the garlic and leeks and sauté for 3 minutes longer or until soft. Add the wine and herbs. Cook until most of the liquid has evaporated. Add the greens and cook until just tender.

Remove to a colander, drain and cool. Gently squeeze to remove excess liquid. Place the greens in a bowl and lightly toss with the cheese. Season with salt and pepper. The filling can be refrigerated for up to 1 day.

MAKE THE SAUCE
In a saucepan, melt the butter and sauté the onions and peppers until soft but not brown. Add the wine, tomato paste, stock and chile powder. Bring to a simmer and reduce over moderate heat by half. Transfer to a blender and puree. Strain the sauce, season with salt and pepper. If necessary, thin the sauce with additional stock. The sauce can be stored, covered and refrigerated for 1 day. Reheat gently.


Preheat the oven to 400. In a medium bowl, lightly beat the egg yolks and set aside.
In a small saucepan, heat the half and half to scalding. In a separate small saucepan, melt the butter and add the flour, stirring to make a roux. Cook for 3 minutes without browning. Whisk the scalded half and half into the roux and cook, stirring constantly, for another 3 minutes or until thickened. Remove from the heat. Stir in the salt, pepper and nutmeg. Gradually whisk the warm mixture into the egg yolks and set aside.


In a medium bowl, beat the egg whites, with a pinch of salt, until they hold stiff peaks. Stir a quarter of the whites and half of the parmesan into the egg yolk mixture to lighten it. Gently fold in the rest of the whites. Butter a 10 by 15 inch jelly roll pan and line with waxed paper. Pour the soufflé mixture onto the prepared baking sheet, spreading evenly to the corners. Sprinkle with the remaining parmesan. Bake for 15 minutes, until the top is browned and puffed. Remove from the oven. Invert and remove the waxed paper. Invert again so the top faces up.

ASSEMBLE THE ROLL
Preheat the oven to 350. Evenly spread the greens and leeks mixture on top of the soufflé layer. Starting with a long edge, carefully roll the soufflé, jelly roll style. Place the rolled soufflé on a baking sheet and bake for 8 to 10 minutes, until heated through and the cheese is melted. Remove from oven and serve on heated plates with the warm pepper sauce.