Grilled Rack of Lamb with Honey-Pasilla Glaze...Oh How We Love Rick Bayless 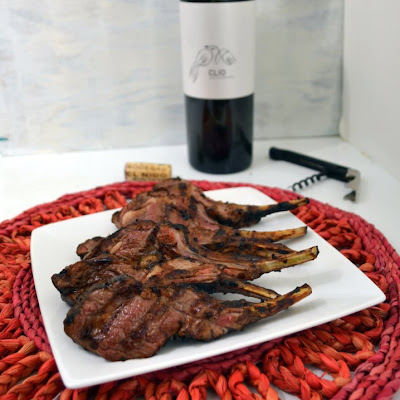 With some beautiful weather hitting us it was time to break out the patio furniture and get grilling. And this meal followed that very familiar Mexican theme again, and again inspired by Rick Bayless. What can we say...we are fairly boring predictable I suppose.We just can't get enough of the flavors his recipes bring to us.

It was a grilling kind of evening but we weren't in the mood for steaks, fish or burgers so when we found this recipe for Grilled Rack of Lamb with Honey-Pasilla Glaze in his Fiesta At Ricks cookbook and we knew it would be love at first inhale. 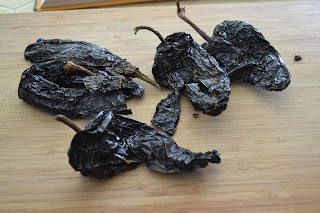 In typical RIck Bayless fashion our dried pasilla chiles were first roasted then soaked back to softness to make the Honey-Pasilla Glaze. 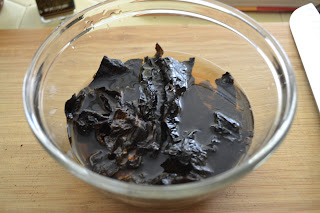 Once reconstituted the chiles were mixed with some spices, vinegar and honey to make a rich and thick glaze for the lamb to be first marinated in and then basted with on the grill. 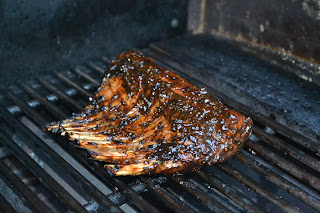 While the lamb marinated we made another of Rick's recipes from Mexican Everyday: Roasted Pepper Salad with Butter Lettuce and Creamy Queso Anejo Dressing. 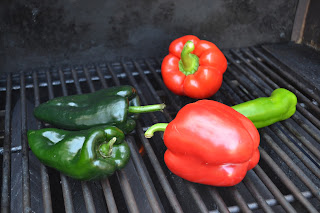 We started by roasting the peppers on the grill for the salad. 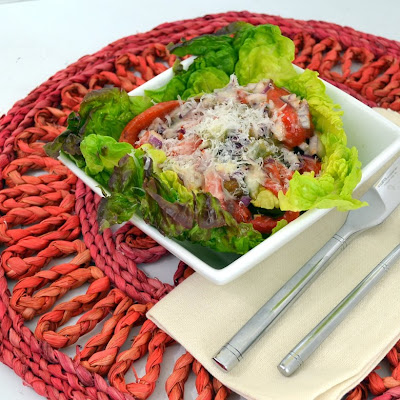 The flavor in this salad was so delish. If you love roasted peppers you'll love this salad.

We also made his recipe for Gulf Coast-Style White Rice Pilaf with additional roasted poblano added to the recipe for a side. 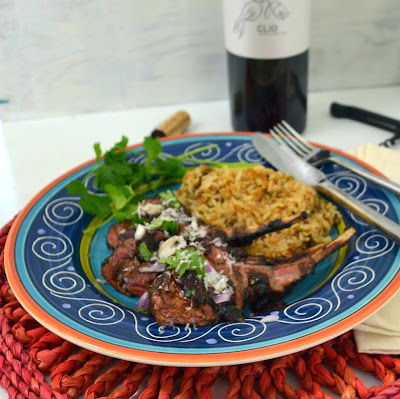 It was a fantastic "The Patio is Open...we're grilling again" kind of meal.

To celebrate we opened one of our splurge wines from the basement cellar a 2006 Spanish Clio made with 100% Granache. 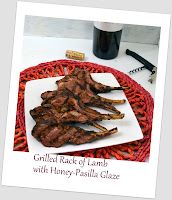 1. The pasilla marinade. Roast the unpeeled garlic on one side of a large skillet over medium heat, turning occasionally, until soft and blackened in spots, about 15 minutes; cool and peel. While the garlic is roasting, toast the chile pieces a few at a time on another side of the skillet, pressing them down firmly with a spatula for a few seconds, until they release a toasty aroma, then flipping them, and pressing down the other side. Scoop the chiles into a small bowl, cover with hot water and soak 30 minutes. Drain, reserving 1/3 cup of the soaking water.
In a food processor blender, combine the chiles, 1/3 cup of soaking liquid, garlic, oregano, pepper, cumin, honey, vinegar and 1 teaspoon salt. Blend to a smooth pure, scraping down and stirring frequently. Press through a medium-mesh strainer into a small bowl.

2. Marinate the lamb. Lay the meat into a baking dish. Smear both sides of the racks with about 1/3 of the marinade. Cover and refrigerate for several hours, if time permits.

3. The salsa. Stir enough water into the remaining marinade to give it drizzleable consistency—it usually takes at least 1/4 cup. Cover and set aside at room temperature (or refrigerate if not using within a couple of hours).

4. Grill the lamb. Light a gas grill, setting the temperature at medium-high on one side, medium-low on the other; or light a charcoal fire, letting the coals burn until they’re covered with white ash but still very hot, then bank them to one side. Using the side of a spoon, scrape the marinade off the meat, reserving it for basting later. Brush or spray the lamb racks with oil and lay them, meaty “cap”-side down, onto the hottest part of the grill, when they are well seared (“marked” with the grill grate pattern, as we say in the restaurant kitchen), about 2 minutes, flip them over and sear on the boney underside. Baste the top with the reserved marinade, then move them to the cooler part of the grill and let them cook until as done as you like, usually about 5 minutes for medium-rare.

5. Serve. It’s best to let the meat rest for a few minutes on a very cool part of the grill or in a very low oven, to reabsorb the meat’s tasty juices. Then slice the chops between the bones. Drizzle a little of the salsa on each of 4 warm dinner plates and sprinkle with the onion. Arrange the meat over the top and sprinkle with the cheese and parsley leaves. Serve right away.