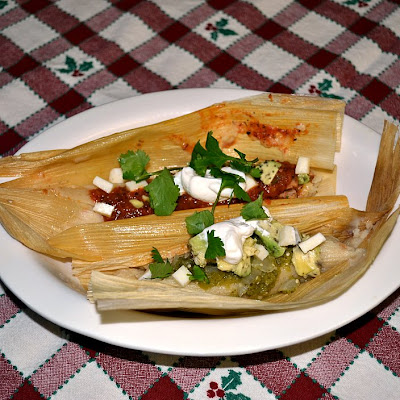 We've been wanting to establish an annual tamale making tradition at Christmas for some time now.
We attempted to try a few Christmases ago but we bought pre-made masa dough, it made way too many tamales and we were all pretty burned out and the tradition just never caught it's momentum.
My sister actually requested that we give it a try again this year and we decided why not. G immediately went to his 'cooking mentor' Rick Bayless for ideas. Now don't get me wrong I'm as much a Rick follower as he is but sometimes, just sometimes, his recipes are far more complicated and drawn out than we have time for. And being Christmas and all this was one of those times we just didn't need to drag it out any more than we had to.
I went back to our trusty Cuisine at Home subscription collection because I had a faint recollection of a tamale recipe that we had wanted to make. (as we've shared before we've subscribed to this cooking tool for over 12 years, it has failed us on very few recipes....the bummer is unlike Bon Appetit or Cooking Light all the recipes are not readily found online so you have to go back to the magazine. We have a mediocre method for referencing them but I'll tell you we need a better one now that we hav 12 years of issues. Finding that recipe you kind of remember seeing once is too tedious.)
Eventually I found the issue from December 2009 that had creeped into my vague memory for Tamales at home.
G made the masa dough the day before using a combo of lard, vegetable shortening,butter and homemade chicken broth. He also cooked off some chicken thighs the day before. 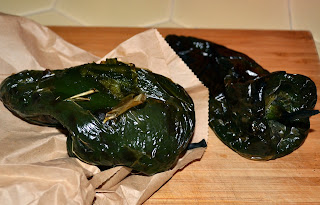 On Christmas morning we got up and made the chicken-chile filling with the thighs using a roasted poblano and canned fire roasted tomatoes.
We doubled the chicken-chile red sauce and reserved half to use as a topping sauce. I also decided to make a green tomatillo-cilantro sauce that I found on epicurious to give us 2 sauce options to compliment the tamales. 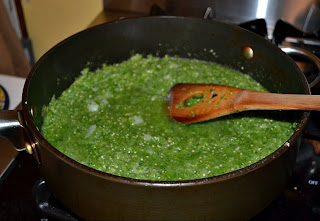 We took all the needed ingredients and toppings to my mom's house to be prepared by the family. 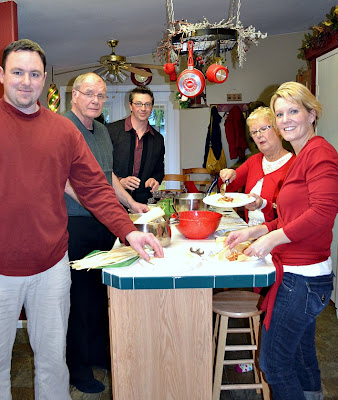 We first soaked the corn husks in warm water for about 25 minutes and then everyone got busy making tamales. (Cuisine at Home had great step by step directions and tips...all of their suggestions really helped this time.) 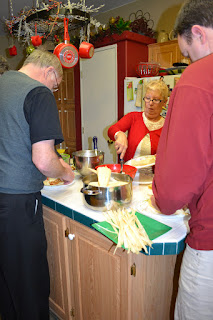 It all came together pretty quick this time. Actually this time we wished we had doubled the masa recipe as we could tell there were not going to be many leftovers after this dinner. 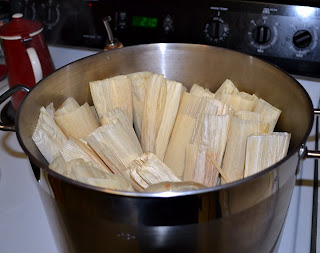 After we had them all made we put them in the pot to steam for about an hour and a half. The recipe warned to not let your water boil out from the bottom nor let the water touch the actual tamales. I truly believe this was one of our pitfalls from our first year's attempt. As it warned the water will make them dense and heavy which is what I remember from our first tamale party. 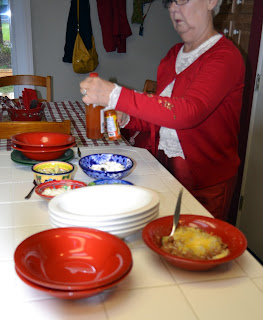 Finally it was time to eat our wonderful tamales. My mom helped set out the crema, diced avocado, cotijo cheese, cilantro and both our red & green sauces. 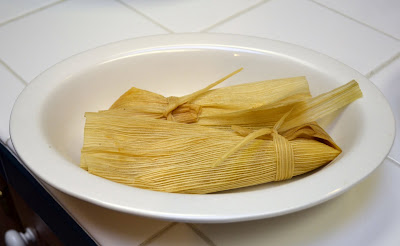 The tamales came out of the steamer looking pretty tasty. But opened up with a little sauce, some of each for all of us, and topped with wonderful toppings they were exceptional. Really! 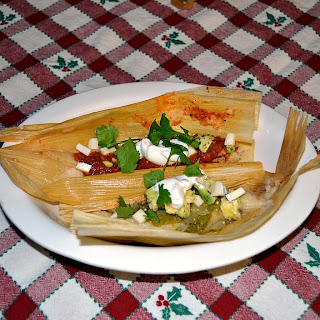 Delicate, flavorful and down right delicious. G really did a fantastic job on making just the right consistency of the dough. You could really taste the difference.
We are certain this batch will keep the momentum going and tamales for the holidays will become an annual event. If you haven't made your own tamales before we recommend breaking it up into steps over at least 2 days, 3 would even be better but 2 worked for us, and definitely have a crowd together to share the work. It's kind of fun.. they most likely won't mind working for their dinner.
﻿
Posted by Unknown at 11:53 AM